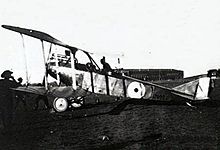 The Rumpler C-types were single-engine combat aircraft from the Rumpler Flugzeugwerke , which were used on all fronts as reconnaissance and multi-purpose aircraft by the German , Bulgarian and Ottoman air forces during the First World War .

The initial success with the Rumpler B-types and their seaplane versions for the Imperial Navy encouraged the Rumpler Flugzeug-Werke to construct an armed biplane for reconnaissance and other tasks on this basis.

Model of a Polish Rumpler CI

The result was the Rumpler CI (factory designation 5 A2), which was clearly similar to the BI and how it had the typical tail of the Rumpler Taube with a grinding spur. The wings were slightly stalked and had a viewing section on the fuselage to optimize visibility from the cockpit. A 160 hp Mercedes D III engine served as the drive, and from 1916 in the Rumpler C.Ia version there was also an Opel Argus As.III in- line engine with 180 hp, the semicircular radiator of which was centrally located on the upper leading edge of the wing. The first flight tests were so promising that mass production started very quickly not only at Rumpler itself, but also under license at Germania Flugzeugwerke, Märkische Flugzeug-Werken (MFW), Hannoversche Waggonfabrik (HAWA) and Albert Rinne Flugzeug-Werken. Later CI received, in addition to the observer MG, a synchronized MG mounted on the left of the fuselage, rigidly directed forward, synchronized MG for the pilot. Production ran in large numbers until June 1917, with HAWA 387 C.Ia and Bayerische Flugzeugwerke alone delivering 150 unarmed CI as training aircraft.

The planned further development to the Rumpler C.II did not take place, instead the Rumpler C.III (factory designation 6 A5) appeared at the end of 1916 with still swept wings of different depths and also shorter tail wings, plus a modified tail unit, stronger Benz engine and propeller hood followed by the only slightly modified, more powerful Rumpler C.IV (factory designation 6 A7) with an even more powerful and fully wired Mercedes D.IVa engine and modified fin. In addition to Rumpler, the Pfalz-Flugzeugwerke produced the C.IV under license, which incorporated ailerons on both wings as a slight modification.

For the navy, a float version of the CI was designed as Rumpler 6B1 or later with the tail unit of the new Rumpler C.IV as Rumpler 6B2 . 98 machines were created from these two versions.

The Rumpler C.VII , built from 1917 onwards, was slightly smaller than its predecessor and had a 240-horsepower Maybach engine, which, despite its lower power and higher compression, improved the aircraft's high-altitude flight characteristics even further.

The CI came to the front in 1915 and, due to its versatility and reliability, remained one of the longest-running C-aircraft; in October 250 aircraft were in use and if from 1917 these could only be used in secondary theaters of war such as in the Balkans or Palestine , then CI remained on the front in isolated cases until the end of the war. CI served as reconnaissance aircraft and as light bombers and later, thanks to their good-natured flight characteristics, as training aircraft.

In February 1917, 75 of the C.III's were in service at the front, but their performance remained behind. The C.IV (factory designation 6 A7) was widely used for this and was particularly suitable as a photo reconnaissance aircraft due to its particularly good high-altitude flight performance, for which a camera was permanently installed through a bottom flap. Like its predecessors, the C.IV could carry up to 100 kg bombs. The production was shared by Rumpler, the Bavarian Rumplerwerke (Bayru) and Pfalz.

The even more successful C.VII was equipped with a tactile radio device in 1917 or the Rumpler C.VII (Rubild) variant was used as an excellent photo reconnaissance aircraft with a serial camera, whereby the pilot machine gun was even dispensed with to reduce weight, but the crew was provided with oxygen devices and electric heated aviator gear made it possible to work at an altitude of over 7,000 m. C.IV and C.VII were still so fast at high altitudes that they could easily evade an attack by Allied hunters - a great advantage, as the photo reconnaissance had to be carried out in part far beyond the front lines over enemy territory. Both types remained in use until the end of the war.

Nothing is known about the use of types C.VIII to CX.

Use after the end of the war

In 1919, some CI reached Poland and were used by the Polish air force in the fight against Soviet Russia in 1919/20. After the war, several Rumpler CI were converted into civilian airliners.

The Lithuanian Air Force bought three CI in June 1919 from Aviation Division No. 425. Two of them between 1919 and 1920 were used in the war against Bolsheviks and Poles.