The STEREO experiment (Search for Ste rile Re actor Neutrino O scillations) examines the possible oscillation of reactor neutrinos into sterile neutrinos . It is located at the Institut Laue Langevin (ILL) in Grenoble, France. Data collection started in November 2016. 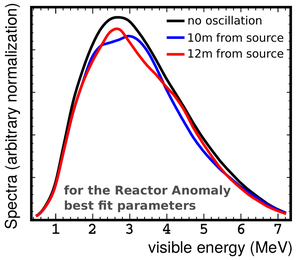 Figure 2: Comparison of the measured neutrino spectra at a distance of 10 m and 12.2 m from the reactor.

The STEREO detector is about 10 m away from a research reactor (58 MW thermal power) at the ILL. In order to be able to detect the neutrinos emitted by the reactor - more precisely: electron antineutrinos - the detector is filled with 1800 liters of an organic liquid scintillator . There neutrinos are detected by inverse beta decay :

The same reaction was used for the very first experimental detection of neutrinos in the Cowan-Reines neutrino experiment . The reaction events of interest are identified by a characteristic sequence of two impulses:

The expected distance between the oscillation minimum and maximum of sterile reactor neutrinos is about 2 m. Therefore, the 2.2 m long detector is divided into 6 separate sections, which measure the energy spectrum of the neutrinos separately from each other. A possible oscillation can be detected by comparing the measured spectra (see Figure 2).

The STEREO experiment registers around 400 neutrinos per day.

Since neutrinos only interact very weakly, detectors for neutrinos have to be very sensitive and therefore need good shielding against unwanted signals.

The six inner detector cells are surrounded by a gadolinium-free liquid scintillator, which acts as a "gamma catcher" by detecting incoming and outgoing gamma quanta . This both increases the detection efficiency and improves the energy resolution. Above the detector is a water-filled Cherenkov - anticoincidence detector, in the muons from the secondary cosmic rays are detected, which would otherwise form a disturbing background. Against neutrons and gamma rays from the surrounding experiments, the detector is surrounded by several shields made of lead, polyethylene, steel and boron carbide (65 t in total).

While neutrino oscillation is now a well-understood phenomenon, there are some experimental observations that question the completeness of this understanding. Probably the most prominent observation in this regard is the so-called reactor antineutrino anomaly (RAA). Many neutrino experiments close to the reactor have measured a significantly ( ) lower flow rate of electron antineutrinos ( ) compared to theory . Further experimental anomalies are the unexpected occurrence of in a beam at short distances in the LSND anomaly and the gallium neutrino anomaly, which describes the disappearance of at short distances during the calibration phases of the GALLEX and SAGE experiments .

These anomalies could lead to the conclusion that our previous understanding of neutrino oscillation is incomplete and that neutrinos can oscillate into another previously unknown type of neutrino. Measurements of the decay width of the Z boson at the Large Electron-Positron Collider (LEP) conclude the existence of other slightly more "active" ones, ie. H. the weak interaction of underlying neutrinos. Therefore the oscillation is converted into additional light “sterile”, i.e. H. investigated neutrinos not affected by the weak interaction as a possible explanation. From the theoretical layer, sterile neutrinos emerge in some prominent extensions of the standard model of particle physics, e.g. B. the Seesaw type 1 mechanism. 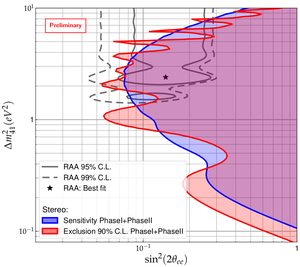 Figure 4: Results of the STEREO experiment to investigate the possible existence of lighter sterile neutrinos as an explanation of the RAA. The blue area shows the expected parameter sensitivity, which should be achieved under the expectation that no additional neutrino species exists. The red area shows the parameter area excluded due to the real measurement. It fluctuates around the blue expected range due to statistical fluctuations. The black lines show the parameter range favored by the RAA, which has already been largely excluded.

First results from 66 days with the reactor switched on were presented in 2018. Most of the parameter range of sterile neutrinos favored to explain the RAA could be excluded with a certainty of 90%. New results from December 2019 include around 65,500 measured neutrinos (combined phases 1 and 2; 179 days with the reactor running). With the current data set, the exclusion region can be expanded further (see Figure 4).