The title of this article is ambiguous. For the Polish writer see Mouni Sadhu .

Sadhu ( Sanskrit साधु IAST sādhu , German 'good or also: holy man' ) is a generic term in Hinduism for those who have committed themselves to a religious, sometimes strictly ascetic life, it particularly designates the monks of the various Hindu orders . 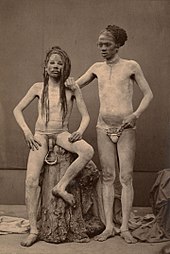 A sadhu who has completely given up worldly life, lives ascetically and is in the fourth and thus last phase of the Vedic ashrama system is a sannyasin , a "renunciation". But there are also sadhus who get married and start families, such as the Baul , members of a mystical sect in eastern India. Baul roam around, sing their typical religious songs in villages and towns and make a living from the donations. You have modest apartments.

Other sadhus form communities in ashrams or live in living quarters connected to temples . Here they dedicate themselves to the spiritual life, study and teach the scriptures. In addition to spiritual activities, many sadhus also engage in philanthropic and humanitarian tasks, particularly those of the Ramakrishna mission and the Swaminarayan mission, both of which are very popular in India. They organize aid for the poor and arrange disaster relief.

Some wandering sadhus, especially ascetic sadhus, the sannyasins , are content with some place near a temple; others live in caves or are completely homeless on the move. Many sadhus smoke hashish (charas) or cannabis (ganja) , among other things for the purpose of meditation. Sannyas is also the last of the four stages of an ideal Hindu life that the Dharma , the Hindu ethic, envisages as desirable. In the last phase of life it is therefore appropriate to detach oneself from everything worldly and to devote oneself to the search for redemption, homeless, nourishing oneself on mild gifts.

However, many men choose to be sadhu at an early age. After the decision to renounce, the seeker joins a guru who introduces him to spiritual teaching as well as to techniques of asceticism and meditation, and whom he serves as a disciple. He then takes a personal vow that imposes different requirements depending on the guru's prescriptions. This can be homelessness, poverty, sexual abstinence, fasting and complete lack of needs. Some sadhus live in complete nakedness . The Hindu orders belong to completely different currents and countless subgroups, which also make different demands on their sadhus.

In addition to the sadhus who devote themselves to spiritual development, there are also some who, in order to demonstrate their complete devotion, perform bizarre achievements: For example, some have set world records , e.g. B. "17 years standing" or "holding an arm in the air for 25 years". Such actions are seen as sacrifices for the respective god. Through them the sadhus strive for a mystical insight.

In India, sadhus are usually very respected, as their asceticism is seen not only as a personal task but also as a vicarious act for many. In the 1970s, in contact with the sadhus and sadvis in Goa, the modern psychological subculture emerged. Yata, the dreadlocks, came to Europe as a symbol of Shiva via the hippie culture.