Originally there is no distinction between Ampalang and Apadravya on Borneo , the place of origin of piercing. Rather, both are referred to as Ampalang , Burah palang or just Palang , regardless of their orientation . The different names for the two piercings goes back to Doug Malloy and established itself through an article in the piercing magazine PFIQ .

Piercing can look back on a far-reaching tradition. It is found in different tribes of Borneo such as the Dayak , Kelabit and Iban and is also mentioned in the ancient Indian Kamasutra ( कामसूत्र ) from the 2nd century , where its lust-increasing effect, especially for women, is praised. The following text can be found in the Kama Sutra:

“ The pallang is attached to the lingam (लिङ्ग) (penis) to increase its thickness and better fit the yoni (योनि) (vagina). Among the peoples of the South (India) there is the belief that no real sexual pleasure can be felt until the lingam has been pierced with an apadravya ... a sharp object should be used for this and the man should be in the water, as long as the wound is bleeding. In the evening he should practice sexual intercourse to clean the wound. Then he should treat the wound with decoction and cover the opening with a piece of bamboo. This should be continuously enlarged to stretch the opening. "

An apadravya is a vertical pallang. The upper ball stimulates the woman's G-spot during intercourse

The recommendation to bring the fresh wound into contact with the water of Indian lakes or ponds, as well as the subsequent sexual intercourse, is to be rejected from today's medical point of view. However, stretching the piercing is particularly advisable with this piercing due to the mechanical stress. Whether the passage from the “peoples of the south” refers to tribes in the south of India or to other parts of Southeast Asia is a matter of debate.

The first mention in European historiography can be found in a report by Thomas Cavendish from the year 1588. He writes about the inhabitants of the island of Capul:

At that time the piercing was widespread beyond Borneo in various regions of what is now Indonesia and the Philippines , but is now only found in Borneo. The piercing is practiced by the Dayak, the Kayan and the Iban, with the piercing being best documented among the Iban. The explorer and adventurer WA Nieuwenhuis, who traveled to Borneo in 1897, wrote in his book Across Borneo :

“ The young men did indeed get through the tattoo; because it is only carried out to a limited extent in them, suffering much less than women, but in return, in order to attain their full manhood, they must submit to another test, namely the piercing of the glans penis. The procedure for this operation is as follows: First, the glans is drained of blood by pressing it between the two arms of a bent bamboo strip. On each of these arms there are openings opposite one another at the required points through which, after the glans have become less sensitive, a sharp, cap-remote pin is pressed through; In the past, a pointed bamboo stick was used for this. The bamboo clamp is removed and the pin attached by a string is left in the opening until the canal has healed. Later, the copper pen (utang) is replaced by another, usually a pewter one, which is worn all the time; the metal pen only makes room for a wooden one during hard work or during strenuous activities. Particularly brave men enjoy the privilege with the chief to be allowed to wear a ring on the penis that is cut from the scales of the pangolin and studded with blunt teeth; Sometimes they can be crossed with the first canal and a second can be drilled through the glans. Besides the kajan themselves, many Malays from the upper hood also practice this art. The pain during the operation does not seem to be very severe, and it rarely has serious consequences, although it often takes a month for recovery. "

The piercing is also justified by the Southeast Asian tribes mainly through its effect on women:

" The lady had various ways of indicating the size of the ampallang desired. She might hide in her husbands plate of rice a betel leaf rolled about a cigarette, or with the fingers of her right hand placed between her teeth she will five the measure of the one she aspires. The Dayak women have a right to insist upon the ampallang and if the man does not consent they may seek separation. They say that the embrace without this contrivance is plain rice; with it is rice with salt. "

Whether the piercing was created separately in India and Borneo has to be regarded as unclear so far. However, there is much to suggest that Borneo was the place of origin.

The most famous wearer of this piercing today is the British singer Pete Doherty . 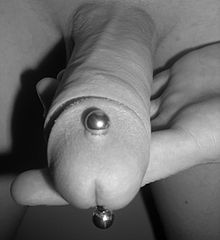 The apadravya is pierced vertically, usually in the middle of the glans, and then runs through the urethra (in the case of an ampallang, on the other hand, the piercing canal runs horizontally through the glans).

There are three different ways to use an Apadravya: as a normal piercing with a clamp or free-hand or with a scalpel . The length of the jewelry should be conveniently determined before starting the actual procedure, taking into account not only the position but also the angle of the planned piercing when measuring. Do you want z. B. later wear a hemisphere as the end of the rod, the branch channel should emerge there as perpendicular as possible to the body surface. As a rule, a small allowance will be added to the required minimum length in order to compensate for any swelling and thus facilitate healing. The length of the rod can then be reduced again later without any problems.

Regardless of how the apadravya is performed, one begins with cleaning and disinfecting the affected area. In contrast to most piercings, it is not sufficient here to only treat the actually affected part of the body, rather a larger area of ​​the scrotum and abdominal wall should be included in order to avoid recontamination when the penis is removed. A surgical perforated film can be used here well. Then the intended entry and exit points of the piercing are marked.

When using an apadravya, you have to expect significantly more bleeding than is the case with most other piercings. These can last a few minutes. After the bleeding has subsided or the piercer has brought it to a standstill, the penis is cleaned again and then appropriately wrapped in order to avoid contamination of the wearer's laundry. This bandage should then be worn for a few days, although in the beginning it can happen that you have to change it several times a day. After all, the penis is a part of the body with a fairly good blood supply, and the pressure that occurs is also subject to significant fluctuations. After a few days, the corresponding blood residues will mainly show up overnight before you can do without the bandages entirely.

An apadravya can also be stung in two sessions. Often “you” start with a Prince Albert piercing (PA) and only later add an Apadravya. Incidentally, the upper half of the piercing is not identical to a Prince Albert Reverse , because the piercing channel has the same position, but is pierced at a different angle. 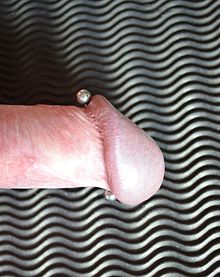 In addition to the usual positioning in the urethra, Apadravyas can also be offset laterally, e.g. B. as a couple, sting. In addition to the greater actual length of the puncture canal, the somewhat different tissue ( corpora cavernosa ) should also contribute to an increase in the healing time.

If the puncture canal runs behind the glans it is called a shaft apadravya . Positioning in the glans furrow (sulcus coronarius) is possible without any major problems, but if it is positioned further back on the penis shaft, the mobility of the skin must be carefully considered, otherwise the piercing can be quite uncomfortable for the wearer. An apadydoe is a piercing in which a ring is worn through an apadravya and a dydoe or two . It usually runs through two pair of dydoe piercings. The cross combination of an Apadravya with an Ampallang is called a Magic Cross .

A straight barbell with a diameter of at least two millimeters is usually used as jewelry , whereby it must be ensured that it is sufficiently long even with an erection. Apadravyas can also be stretched to extreme sizes, but due to the firm structure of the tissue, significantly more effort and patience is required than with most other piercings. As a wearer of an apadravya you hardly ever have to worry about the risk of the piercing growing out.

The Apadravya has a relatively long prick canal and thus a long healing time compared to other genital piercings. This is very different from person to person and is also influenced by the personal handling of the piercing. An average of four to six months can be assumed. In extreme cases, it can be more than a year. Sexual intercourse should be possible after a month, but the use of a condom is then mandatory!

The piercing is said to have a particularly pleasurable effect on the sexual partner, which is why it is often called "Happydravya" . The Apadravya increases the resistance during sexual intercourse and in most positions directly stimulates the woman's G-spot , which is usually experienced by the woman as very pleasurable. Similar to the Prince Albert piercing , the Apadravya can also have a positive effect on men during sexual intercourse, as it stimulates the sensitive urethra.