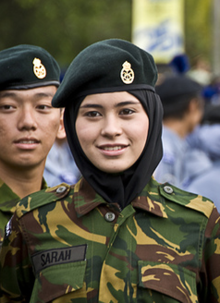 Sarah was born as the daughter of Pengiran Salleh Ab Rahaman, a distant relative of the royal family, and the Swiss Rinawaty Abdullah Suzanne Rahaman Aeby (nee Suzanne Aeby ) as the third child and first daughter.

She attended St. Andrews School and the Sultan Science College in Bandar Seri Begawan and completed a degree at the University of Brunei Darussalam , which she graduated with a bachelor's degree in October 2010 .

Sarah was married to Crown Prince Al-Muhtadee Billah in an arranged wedding on September 9, 2004. The celebration took place at the Istana Nurul Iman . Crown Princess Sarah gave birth to her first child on March 17, 2007 and the likely 31st Sultan of Brunei, Prince Abdul Muntaqim . On January 2, 2011, she gave birth to their second child, Princess Muneerah Madhul. Two more children followed in 2015 and 2017.