This article needs to be revised: It mainly lists methods for determining the layer thickness (list actually only refers to paint layers). The rest (which is only the introduction) deals with the trivial description of the thickness of a material layer and is hardly suitable for an independent article. In addition, thin layers that are produced, for example, by PVD or CVD processes, are not mentioned or treated.
Please help to improve it , and then remove this flag.

Layer thickness in the technical sense is the material thickness of one or more coatings on a substrate. A coating can be of organic origin, such as a lacquer layer, or inorganic, such as the metal layer of an electroplating process .

Depending on the application, there are different methods of determining the thickness of a coating. Simple layer thickness measurements can be carried out with a caliper or micrometer , but in the area of ​​thin layers these devices are not always sufficiently accurate and the handling is unsuitable for this measuring task. Several criteria apply when distinguishing useful measurement methods:

This testing device consists of a sheet metal part with prongs of different lengths. The measuring comb is pressed into the fresh paint layer and the layer thickness is read off the prongs that have not yet been wetted by the paint.

The rolling rim has three wheels arranged in parallel, of which the middle one is slightly smaller and eccentric. This device is also pressed into the wet paint layer and rolled through it until the middle wheel just touches the surface of the paint film and the layer thickness can be read on a scale.

Non-destructive methods for determining the wet layer thickness are not possible on a mechanical basis. Therefore, the following methods are used here, which are especially popular for measuring the layer thicknesses of non-baked powder coatings .

The IG clock is the classic measuring device for determining the destructive layer thickness of dry coatings. With its three feet, it is placed on a prepared layer of lacquer in such a way that the middle foot rests on a point where the coating was previously removed down to the substrate. A mechanism in the watch transmits the difference in height between the middle foot and the outer feet to a scale on which the layer thickness can be read.

The PIG is a combination device which is generally ideal for examining a paint layer. One focus of this device is the layer thickness measurement, which is made possible here by making a wedge cut in the paint layer. The wedge cut reveals an overview of the entire layer structure down to the subsurface, and the layer thickness can be read off with a known angle of the incision using a length scale inside the microscope attached to the PIG.

The Tolansky method is a method in which monochromatic light creates a measurable interference pattern.

Due to the measuring principle, devices on this basis can only be used on ferromagnetic substrates that are covered with non-magnetic layers. A permanent magnet attached to a spring is placed on a surface. The adjustable spring is adjusted until the spring force exceeds the holding force of the magnet and the magnet detaches from the surface. The layer thickness can be read directly from the scale for changing the spring strength. This measuring device is available in the form of a pen, but also in a horizontal design, the so-called banana .

Electrical and other procedures 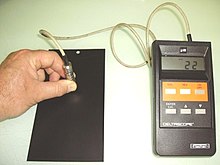 Coating thickness measuring device based on the magnetic-inductive method 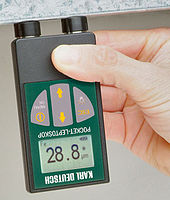 The magnetic-inductive method can also only be used on ferromagnetic substrates. In this case, a magnetic flux is generated by the current in the primary coil of an electromagnet, which in turn results in an induction voltage. The layer thickness is determined by measuring the change in the magnetic flux and thus the induced voltage.

The eddy current method is not limited to ferromagnetic substrates, but can also be used on other metallic substrates. The measured variable influenced is the change in the inductive resistance of a measuring coil due to the layer thickness.

This procedure is described in the standards DIN EN ISO 2360 and ASTM B 244.

In the capacitive method, a plate-shaped probe attached to the surface to be measured serves as the electrode of a plate capacitor. In this structure, the metallic substrate forms the second electrode. The measured capacitance C of this capacitor is used to calculate the layer thickness with the aid of the measuring area and the dielectric constant of the coating. Since the latter is usually not known, this method is used less often.

The layer thickness measurement according to the ultrasonic method is based on interference effects between ultrasonic waves . The ultrasonic waves hit the paint layer and are only partially reflected. A large part enters the paint layer and is in turn partly reflected at the next interface. This can be done over several layers, the layer thicknesses of which can be determined by determining the phase shift of the reflected sound.

Β-radiation is directed from a radiation source onto the object to be measured. These are reflected differently from the matrix of the coating material than from the metallic substrate. The layer thickness can be determined from the different transit times. This method is rather imprecise, but offers the advantage of a high measuring speed and is therefore suitable for online monitoring of layer thicknesses.

As with the β-backscatter method, radiation is used here, in this case X-rays . To determine the layer thickness, the signals of the different reflections from the coating material and the matrix are also evaluated.

In the photo-thermal process or in the thermal layer test (TSP), a coating is heated up either in pulses or periodically by means of a laser or a flash lamp and the re-radiated heat radiation is detected without contact with an infrared sensor. The time dynamics of the radiated thermal radiation is influenced by the layer thickness of the coating, provided that the thermal or optical properties of the coating and the substrate differ. By calibrating the thermal properties of the coating and the substrate, this method can be used to determine the layer thickness without contact.