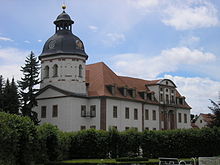 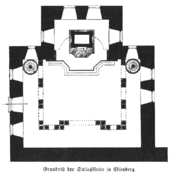 Chancel with the two-story organ

The Schlosskirche St. Trinitatis is a church in the Thuringian town of Eisenberg . It is considered the most magnificent baroque church in Thuringia .

St. Trinitatis, the most magnificent baroque church in Thuringia

After the death of his father, Duke Ernst I of Saxe-Gotha-Altenburg , Duke Christian von Sachsen-Eisenberg received part of the former Principality of Altenburg with the offices of Eisenberg, Camburg, Ronneburg and Roda as the Duchy of Saxe-Eisenberg . He chose the city of Eisenberg as his residence. Here he built the Christiansburg Palace , on the east side of which he built the baroque palace church from 1680 to 1692.

The Eisenberg Castle Church is a transverse church with a choir facing east, in which the pulpit altar and the two-story organ are located. The building was managed by Wilhelm Gundermann from Altenburg and Johann Moritz Richter from Weißenfels . The court painter Harms painted the church since 1684. The vaulted choir ceiling is filled with the fresco "Adoration of the 24 Elders, Before the Throne of God". The arched arch is decorated with plastic stucco work.

The altarpiece depicts the Annunciation and is surrounded by a wreath of flowers and fruits in stucco work. The altar painting was created by the Gotha chamber painter von Block. The large golden letters above the altar mean: “The word of the Lord abides forever” - “Verbum-Domini-Manet-In-Aeternum”.

The two-manual organ with 21 registers was installed in 1683 by Leipzig organ builder Christoph Donat and expanded in 1731 by Tobias Heinrich Gottfried Trost . In 1862, Karl Ernst Poppe (Altenburg) rebuilt the building for 392 thalers, with a further rescheduling. After several restoration work in 1963 by Gerhard Kirchner and 1977 by Wilhelm Rühle , the organ was restored in 1988 by the company Eule Orgelbau Bautzen .