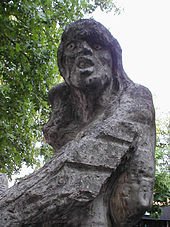 The black courtier sculpture is a sculpture by the sculptor Dieter Klumpp , which is set up in Böckingen opposite the former Friedenstrasse school at the community center Böckingen . The figure refers to a historical female figure during the Peasants' War .

Triptych of chains of oppression , throne of power and court maid

The Jurassic lime sculpture by Dieter E. Klumpp in honor of the Black Courtwoman , a historical figure of the Peasants' War from Böckingen, was made public in 1986 after 31 months of work with the support of the Association of Friends of Municipal Museums and the Heilbronn District Savings Bank presented. The sculptor and artist, who was born in Böckingen, wanted the historical framework, the peasants' war , to be expressed in the sculpture . This is achieved through a three-part composition consisting of the central part Chains of Oppression and the two side parts, the throne of power and the court maid .

The sculpture, created after preliminary studies from 1983 to 1985, triggered a lively debate about the aesthetics of art in public space even before it was installed in Böckingen in 1986. A preliminary study carried out in red sandstone from 1983 for this work is located on the Wein-Panorama-Weg on the Wartberg in Heilbronn .

After a residential building was built at the location of the sculpture opposite the former Friedenstrasse school known as the "Old Town Hall", only about two meters behind the once free-standing sculpture, which now forms a less representative backdrop for the sculpture, another discussion about the sculpture and its location arose .

The seven-ton, 2.30 m high and 4.05 m wide work forms a triptych , the middle part of which is flanked by two figures. The black court maid sculpture shows stylistic similarities with the triptych Guernica . The three-part triptych-like structure of the figure ensemble reveals a stylistic relationship: the frieze-like length of the figure is broken up just like in Picasso's Guernica.

Throne of Power
The left side of the triptych, the Throne of Power , is intended to represent the power of the clergy, which is expressed in a throne with a tiara formed from a human figure, whereby the figure can also be interpreted as a dragon.

Chains of oppression
From the symbolically represented clergy, chains lead to the central figure part of the triptych. The figure Chains of Oppression shows bones, fists, bodies and chains that are inseparable. Analogous to the Passion Altars, Klumpp shows the main motif in the middle field, namely the Passion as a symbol of suffering:

Black courtier
The right side of the three-part composition, the courtier , depicts the historical figure from the Peasants' War as an unclothed woman with chains and a clenched fist who has already released her chains. The nudity of the figure is intended to underline the situation of being at the mercy of the authorities.