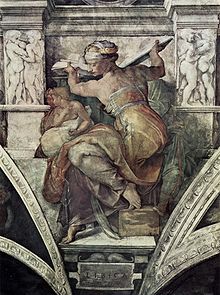 The Libyan Sibyl is one of those named after Varro , a Roman historian of the 1st century BC. BC , ten sibyls differentiated from lactance , each provided with a geographical epithet .

A single Sibyl called Libyan is in the 5th century BC. Already verifiable in Euripides in the satyr play Busiris , where she is represented as the daughter of Zeus and Lamia . The original text has been lost, but has come down to us in quotations from other authors.

In Gothic and Renaissance art , the Libyan Sibyl is usually depicted as one in a series of sibyls based on Varro, often in contrast to an often equal number of prophets from the Old Testament. Probably the best-known pictorial representation is the Libica of Michelangelo in the fresco on the ceiling of the Sistine Chapel , where a total of five Sibyls alternate with seven prophets. She is shown picking up or putting down a book behind her with a twisting movement of her body.

Further representations of a Libyan Sibyl are u. a. found in the following locations:

A modern representation of the Libyan Sibyl can be found in the church of the Archabbey of Sankt Ottilien in the way of the Sibyls and Prophets (floor plates in brass and shell limestone).

From the Middle Ages onwards, Christian-inspired prophecies were often assigned to individual sibyls by name. Some of the “prophecies” attributed to the Libyan Sibyls are depicted in the mosaic of the Cathedral of Siena in the following Latin inscription:

The book inscription of the Libica des Michelangelo reads:

Similar words are also given as an inscription (in German) to the Sibylle in St. Ottilien.