Apollo and the sun chariot, depiction of the Freemason Georg Friedrich Kersting from 1822

The sun chariot is the name given to chariot- like mythological representations that depict the journey of the sun . A related mythological symbol with a similar meaning is the sun ship . In early mythology, the sun chariot represented the apparent daily course of the sun from east to west and the way back then, which was still completely unclear. Depending on the concept of cosmology , the sun god (sometimes also the sun itself) controls the car and is the object of worship of a sun cult . 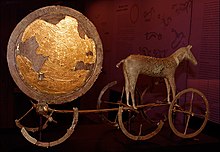 The sun chariot, which is controlled by the sun goddess Sol, can also be found in Germanic mythology . This is pulled by the horses Arvakr (the early watch) and Alsvidr (the universal speed). The Swalin shield protects the car from the heat of the sun.

The names of the constellations Big and Small Dipper (today: Bear) are also interpreted in this context, as circumpolar constellations they show the early astrologer the path of the sun.

The ancient Greek sun deity Helios Ἥλιος drives the sun chariot , as does the Roman Apollo ( Latin Solis currus , sun chariot, course of the sun). The cart is pulled by four fire horses. The myth of the carriage ride of his son Phaethon ( Φαέθων ), who leaves the railway and burns the earth until he is thrown into Eridanus by Zeus, has also been passed down. For Hesiod , however, Phaeton is the morning star (planet Venus ), which suggests connections with the respective calendar systems.

According to the story in the 2nd Book of Kings , during the early period of the kings in Jerusalem there were sun chariots at the entrance to the administrative district of the City of David , which because of the restoration of the monotheistic religion in 622 BC. Were burned in a fire by King Josiah . 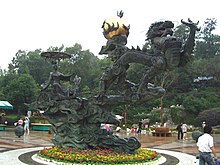 Statue of the sun goddess Xi He on her sun chariot pulled by a dragon.

In Chinese mythology it is Xi He Chinese  羲 和 , Pinyin xīhé who drives the sun chariot, the moon goddess is Chang'e 嫦娥 , cháng'é . Earlier Xi He had for each day of a ten-day period single sun was born, three-legged birds called 陽烏 , yángwū or 金烏 , Jinwu but Houyi 后羿 , the archer had shot them because they were gathered together, and threatened to burn the earth ( there is also a version in which he left the tenth sun alive and ordered it to rise and set regularly). This legend is interpreted as an echo of the failure of an early calendar system and its reform.