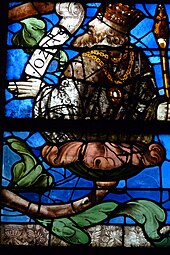 Josiah or Josiah (also Josias ; Hebrew יֹאשִׁיָּהוּ Jôšijjā́hû ; Greek Ἰωσίας Iōsías ; * at 647; † 609 BC BC) was from 640 to 609 BC. Chr. King of the kingdom of Judah (the southern kingdom) from the dynasty of the house of David in the royal period Israel . After the murder of his father Amon , he became king when he was only eight years old. His sons Jehoahaz , Jehoiakim and Zedekiah (Mattaniah) later also succeeded to the royal throne.

The Hebrew name Joschija appears in the MT mainly asיֹאשִׁיָּהוּ jo'šîjāhû . There are also variantsיאוֹשִׁיָּהוּ j'ôšîjāhû ( Jer 27,1  EU ) andיאוֹשִׁיָּה jo'šîjāh ( Sach 6,10  EU ). In all three cases it is about sentence names, the meaning of which is the same apart from the different theophoric element. The subject (יָהוּ jāhû orיָה jāh ) is YHWH . The predicate probably goes to the root that is not used in the MTאשׁה 'šh back, the meaning of which in Arabic is "to heal" (and not to the rootאושׁ 'wš “give”). That is why the meaning of the name is "YHWH heals".

Joschija is already mentioned by name in 1 Kings 13 : 2  Lut . The prophetic announcement there - supposedly made at the time of King Rehoboam three hundred years earlier - is part of a comprehensive editorial design of the royal story. The Joschija tale itself emphasizes that he lived very strictly according to Jewish law, promoted monotheism and radically rejected the worship of other deities ( 2 Kings 22-23  Lut and 2 Chr 34-35  Lut ). He reformed the Jewish worship in the Jerusalem temple and reintroduced the festival of Passover . The code of law that was found during the renovation of the temple ( 2 Kings 22.8  Lut ) is equated in tradition with the Deuteronomy .

Politically, Joschiah used a period of weakness in the great powers Egypt and Assyria to extend the power of Jerusalem and Judas to the city-states of the north. He represented a policy of national unification of the tribes, including foreign immigrant groups or ethnic groups deported by the Assyrians, to a unified state of Judah under the leadership of Jerusalem.

During his time the collection and editing of the biblical writings into a complete work of the history of Israel began under the religious leadership of the Jerusalem all-god YHWH , which was promoted and intensified above all by the prophet Jeremiah . Local cults and gods were suppressed in their importance. From a historical-critical point of view, this editing of the Bible was only completed in Babylonian exile .

The attempt to establish an image-free YHWH as the only permitted object of worship and to prevent the worship of other gods or powers in a visible form was of lasting importance to the Yoschijan cult reform. The reformers apparently did not have long-term success, as evidenced by numerous figures of gods who are predominantly identified with the goddess Astarte and who lived in private houses from the 7th century BC. Have been found. The biblical account also reports that the kings who followed Joschiah did "what YHWH displeased", i.e. reversed the cult reform after his death.

The question of what degree of historicity the biblical account has is the subject of a complex and by no means closed scientific discussion. A distinction is usually made between two parts (a "find report" and a "federal report"), which have been put together for 2 Kings 22 and 23 and which have also been expanded. As a rule, it is also assumed that reform measures actually took place under King Joschiah, with the "purification" of the temple and the restriction of the legitimate cult to YHWH and Jerusalem being the basic principle.

In its present form today, the narrative is strongly influenced by the religious and political interests of the author. On the other hand, it can be proven that it takes up and processes older traditions. Both aspects, the inclusion of existing material and its re-minting out of current interest, give the Joschija story as a whole "primary importance as a historical source for the reconstruction of the religious history of Judah in the late royal period".

In 612 BC The Assyrian capital Nineveh was conquered by the Babylonian king Nabopolassar . Joschiah took advantage of the Assyrian weakness and conquered some parts of the former northern state of Israel . Egypt , like Joschiah, saw a threat in a growing neo-Babylonian empire for a long time . Psammetich's successor Necho II therefore supported the Assyrian king Aššur-uballiṭ II in two campaigns . After the loss of Harran in the first campaign and the associated retreat to the Euphrates , Necho II took a break from fighting and assembled a larger army in Egypt.

In June of the year 609 BC BC the pharaoh set out again towards the Euphrates. Joschija wanted to prevent Necho II from passing through with his army near Megiddo , since the king of Judah was unwilling to act as a vassal under Egyptian sovereignty. The plain near Megiddo has always been the site of various military conflicts; for example, Thutmose III. there the battle of Megiddo . It remains unclear whether there was a battle between the armies of Necho II and Joschija. The second book of kings reports incorrectly only about the death of Joschiah. The more detailed circumstances are not mentioned:

“In his day the Pharaoh Necho, the king of Egypt, undertook a campaign against the king of Aššur on the Euphrates. King Josiah opposed him. But the Pharaoh killed him at Megiddo as soon as he saw him. "

After his death Joschiah was brought from the plain near Megiddo to Jerusalem by his people and buried there. The version of a military conflict only found its way into Book 2 of the Chronicle with the addition of an editor . According to Book 2 of the Chronicles, Joschiah did not die at Megiddo, but succumbed to his injuries in Jerusalem. Jehoahaz took the throne as successor .

Some authors associate Joschiah with the work of the prophet Jeremias, the prophet of the people who had been called by God. In the apocryphal book Jesus Sirach he is considered the ideal of a Jewish king.