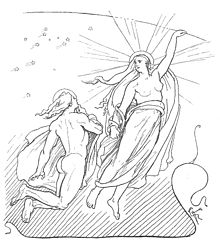 Goddess Sunna with head of flame and wheel of flame

Sól is the personified sun in Norse mythology . It is attributed to the sir .

The old Norse name Sól means "sun", just like the Old High German and Old Saxon Sunna . A personification of the sun by Sunna is mentioned in the second Merseburg spell ; Sól is also mentioned in the Edda . Sól / Sunna can be male (Greco-Roman tradition) or female (Germanic tradition).

Sól is the daughter of Mundilfari , sister of the moon god Máni and the wife of Glenr . The sun itself was created from a spark by the gods.

Sól travels across the sky in the sun chariot , pulled by the horses Arvakr (the early watch) and Alsvidr (the universal speed). The Swalin shield protects the car from the heat of the sun. The team is constantly pursued by the wolf Skalli (Skoll). On the day of the end of the world ( Ragnarök ), Skalli will catch up with the sun and devour it. But Sól gives birth to a daughter, more beautiful than herself, who will continue to appear in the new world.