"Spohns Haus" and its surroundings 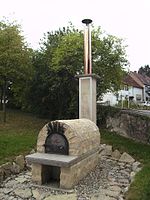 Handover of the 4th UNESCO seal to Spohn's house

Spohns Haus is an ecological education center and school camp in Gersheim .

The school camp consists of different buildings in the center of Gersheim next to the church:

Spohns Haus is a central institution for environmental education in Saarland , as defined and anchored in the Saarland Nature Conservation Act. Its guiding principle is education for sustainable development (ESD), the pedagogical concept consists in the implementation of ESD. To this end, innovative projects and practical offers are developed and tested. An in-house environmental education team uses specific topics to impart skills and competencies for the responsible design of the future. In addition to traditional class stays, youth camps and international youth workshops are also offered, as well as family-related activities (e.g. “cooking with the whole family”).
Spohns Haus has meanwhile further developed its offer: short and recreational vacation for the family, night hostel for pilgrims on the Way of St. James , company and family celebrations, rehearsal site for several days of work for choirs as well as music and theater associations, event location for seminars, training courses and conferences of all kinds Another focus of work is the presentation of various kinds of cultural events.
Spohns Haus is supported by the “Association for European Environmental Education and Environmental Education”. V. "(VEUBE). Financing is primarily provided by financial support from the Saarland Ministry of the Environment, own funds generated and grants from numerous sponsors . The first chairman of the sponsoring association and head of the house is the pedagogue and musician Hans Bollinger (as of 2013).

Spohns Haus places particular emphasis on promoting cross-border contacts between young people; the focus is on a European orientation, especially on German-Polish-French encounters. In all of its activities, the house attaches great importance to its integration into the Bliesgau UNESCO biosphere reserve , in the core of which it is located.

The individual publications of "Edition Spohns Haus", published by the Saarland Ministry for the Environment, Energy and Transport, deal with sustainability-related topics such as: B. water, forest, biosphere, climate or nutrition. The respective teaching modules relate to the Saarland curricula of lower secondary level and are therefore suitable for school lessons. They are also used in extracurricular learning locations such as Spohn's house, where they are implemented in an adventure program for school classes. The following subject areas were published in Edition Spohns Haus: