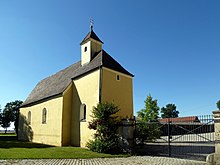 St. Peter is a listed Roman Catholic chapel in the Neutraubling district of Lerchenfeld. Organizationally, St. Peter belongs to the parish of St. Mauritius in the neighboring parish of Mintraching .

The chapel named after St. Peter was built in the middle of the 13th century in the style of a Gothic hall church with a retracted rectangular choir. It was consecrated in 1261 by Bishop Albertus Magnus, according to an inscription inside the building .

Unique to the chapel are the ornamentally framed Gothic frescoes with scenes from the New Testament, which were discovered and restored during renovation work in 1910. Although partially destroyed by the later enlargement of the windows, the mural paintings on the east wall show the beheading of St. John the Baptist and the banquet of Herod. Other depictions show the crucifixion of Christ , the washing of the feet and, among other things, St. Mary Magdalene and the Noli me tangere .

In the church there is an early classical altar from 1787.