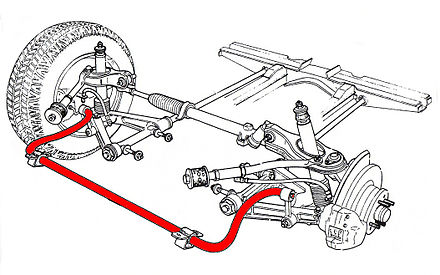 The stabilizer is a spring in the chassis of an automobile that reduces the roll angle that occurs when cornering and with which the self-steering behavior is coordinated in the event of large lateral accelerations . It "was originally mainly used to reduce the tendency of the vehicle to roll in bends ..." Today it is used "... in fast vehicles ... to a great extent also to coordinate the driving behavior."

Typically the stabilizer is a torsion bar spring ; H. a round steel bar with ends bent in the same direction (U-shaped, two lever arms ), which connects the wheels of an axle (see figure above). The straight middle section is usually rotatably mounted on the vehicle body , and the two lever arms are coupled to the wheel carrier or a link via a pendulum support (see adjacent figures). On the MacPherson axle, the stabilizer arm was originally part of the lower wishbone and thus guided the wheel. In the case of rigid axles, the pivot bearing and coupling can be interchanged: stabilizer middle section on the axle, lever arms on the vehicle body.

When cornering, the tendency to roll causes spring deflection differences on the outside / inside of the curve. The spring travel differences deflect the torsion bar and lead to wheel load differences . These counteract the rolling moment that arises from the centrifugal force on the vehicle body; the roll angle is reduced and the roll moment distribution is shifted in the direction of this axis. The wheel load differences of the axle are increased by the stabilizer and, due to the degressive profile of the tire's lateral force over the wheel load, influence the self-steering behavior, especially in the limit area . The desired understeering behavior generally requires a redistribution of the entire supported rolling moment to the front axle. A stabilizer must therefore always be provided on the front axle. An anti-roll bar on the rear axle reduces the tendency to understeer.

In vehicles with transverse leaf springs , this can also take over the function of the stabilizer. It is then not firmly clamped in the middle, but hingedly attached to the body of the car at two points apart, the ends sit on the wheel carriers. It is then bent in an S-shape when the deflection is uneven.

The use of ever harder stabilizers to reduce the roll angle brings disadvantages in driving comfort and in the traction of off-road vehicles that require a large axle articulation. The development of active stabilizers is therefore a logical further development of the technology in order to better resolve the conflicting goals of driving dynamics / driving comfort or driving dynamics / off-road mobility. The active stabilizer was first introduced by Citroën in 1994 in the Xantia Activa model.

The torsion bar is cut open at one point and a hydraulic or electrical actuator is used at this point . In this way, wheel load differences can be generated between the two wheels of an axle even with very small differences in spring travel. As with the passive stabilizer, these reduce the tendency to roll and influence the understeer / oversteer tendency. When driving straight ahead, the torsion of the torsion bar is reduced to improve driving comfort. Examples of active roll stabilization are available from many well-known manufacturers, e.g. B. at Porsche Dynamic Chassis Control PDCC.

If softer suspension springs are combined with a compensating spring , the supported rolling moment is shifted in the direction of the other axis; the roll angle increases. The balancing spring thus has the opposite effect of a stabilizer. Compensating springs were used until the 1980s (on the VW Beetle from German production until 1978) on the rear axle of rear- wheel drive vehicles with a swing axle to reduce their tendency to oversteer.