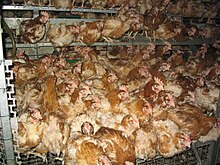 Stable compulsory or stabling requirement describes the official order to lock animals that can normally move in the open air in roofed stables .

This measure became important in connection with the spread of animal diseases . The compulsory stable is intended to prevent farm animals from being infected with pathogens by wild animals living in the wild .

In 2005, poultry were compulsory because wild birds living in the wild could allegedly transmit an infection with the influenza A virus H5N1 , the causative agent of the so-called H5N1 bird flu , to farmed poultry. However, all infections of farm poultry in Europe affected birds housed in houses, while farm birds that were kept in the immediate vicinity outdoors (e.g. as a result of special permits) remained healthy.

In November 2016, due to the occurrence of the influenza A virus H5N8 in wild poultry and poultry farms, compulsory stalls were made mandatory in Baden-Württemberg , parts of North Rhine-Westphalia and Lower Saxony , Mecklenburg-Western Pomerania , Bavaria , Schleswig-Holstein and Brandenburg . From December 20, 2016, stables were compulsory throughout North Rhine-Westphalia. In Austria , the compulsory stable for poultry was made nationwide in January 2017. Since March 16, 2017, the general stable requirement in Bavaria has been relaxed; it now only applies locally to regions affected by bird flu.

There is a big problem for organic and near-natural agriculture, which mainly keep free-range poultry: Free-range chickens are not used to the stables, and free-range poultry farms also offer far too few stall spaces for all animals. If the animals are kept in the barn for a long time, their products can hardly be described as “organic” or “close to nature”, even if organic and free-range eggs can still be sold as such. Animals accustomed to outdoors tend to have poor laying performance, aggressiveness and sometimes lose their natural resistance to other diseases when they are kept in stalls. Feeding is becoming more expensive, and the additional energy and barn capacity requirements often exceed the farms' financial budget. Private keeping of small animals often cannot compensate for these measures.

In Germany, the general stable requirement was relaxed somewhat in mid-May 2006. It continues to apply in the vicinity of infected animals, in resting areas for migratory birds and in regions with particularly high levels of poultry farming. According to an emergency federal ordinance, farmers in less endangered areas can return to free-range husbandry, but must apply for this separately. However, the federal states are entitled to designate areas in which free-range husbandry is generally possible. Furthermore, poultry can now also be kept in outdoor enclosures without a separate permit, provided they are fenced in and the entry of wild birds can be prevented. In addition, the outdoor enclosure must be covered with a tight film to prevent the entry of excrement.