Star sensors or star tracker (. English star tracker ) are optical measuring instruments based on CCD - and other optoelectronic sensors . They are used to search for and (approximate) direction measurement for bright stars and are u. a. used in the following areas:

In space travel, star sensors are one of the most important transmitters in systems for attitude control and flight attitude - GNC ( Guidance Navigation and Control Sensors ), whereby they can control and support the attitude regulation of gyro platforms . They are based on bright celestial bodies (stars of at least 1st size ).

Modern star sensors go back to the development of the space sextant , which was created in the mid- 1960s for the Apollo program and has been used since then.

The accuracy and automation of this astro-direction finding method was u. a. Tested and verified by Soviet cosmonauts  on the Mir space station in the 1980s by performing them with a space sextant (seen at the Mir exhibitions in Munich and Vienna, around 1995).

A procedure that has been tried and tested since 2000 and can be automated is:

The bright stars Sirius or Canopus are traditionally used as stellar objects for steps 3 and 4 . 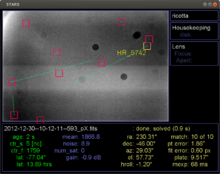 The STARS real-time star tracking software processes a recording of EBEX  2012, an altitude balloon-based cosmological experiment that was launched from Antarctica on December 29, 2012

Newer systems can also work according to a different principle in that electronics compare the recordings of a camera with a stored star map and thus recognize the orientation of the camera in space based on the constellations (see Fig.). The stars for comparison no longer have to be particularly bright.

In general, one can differentiate between the following position sensors - also according to the necessary sensitivity or the spectral range :