The Free World Aristocracy Evangelical Fräuleinstift Joachimstein zu Radmeritz (Polish : Pałac Radomierzyce ) was once considered the most beautiful castle in Upper Lusatia . It is located in the immediate vicinity of the Hagenwerder border crossing near Radomierzyce (Radmeritz). It was built on an artificially created island at the confluence of the Witka ( Wittig ) in the Lusatian Neisse and is now on Polish territory . 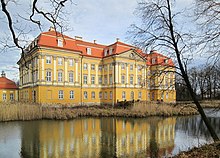 In 1722, the unmarried chamberlain August the Strong , Joachim Sigismund von Ziegler and Klipphausen , established a women's foundation to care for single noble women from Upper Lusatia and neighboring areas, into which he brought all his possessions. For the construction of the monastery palace, Ziegler first asked for designs from the master builders Johann Friedrich Karcher and Matthäus Daniel Pöppelmann . In the end, however, he commissioned the former Saxon master builder Christoph Beyer to carry out the construction work, without, however, handing over the design work entirely. After all, many of the most important Saxon architects and artists in Saxony should have worked in Joachimstein, which therefore became an important building of the Saxon Baroque . The solemn inauguration of the monastery took place after the completion of the work on November 14, 1728.

According to the Ziegler foundation statutes, twelve unmarried evangelical women from Upper Lusatia and neighboring areas who had been in economic difficulties through no fault of their own could find accommodation in the monastery, which was managed by a monastery administrator. At the head of the Convention called Stiftshofmeisterin which functions as a stand Abbess or Prioress or Domina perceived. The conditions of admission become more understandable if one considers that at that time the merchants of the Six Cities had become very wealthy, while many long-established noble families misunderstood the change of times and became impoverished. The central content of the stay in Joachimstein Abbey was initially the "befitting" provision, followed by the upbringing and education of the nuns in the sense of the social formation of the lower nobility. The preparation of women for a possible later role as wives and mothers in a noble household is unmistakable, even though the same is never literally mentioned as a goal in the monastery statutes and a lifelong stay in the monastery was easily possible under the conditions mentioned above.

During the Seven Years' War , the Prussian King Frederick the Great chose the palace as his quarters in 1745. During the Napoleonic Wars , the Lützowers , Field Marshal Blücher and Prince Wilhelm , among others, set up here . Theodor Körner also wrote his appeal to the Saxons here .

When Upper Lusatia was divided by the Treaty of Vienna of 1815, the Wittig was defined as the border river between Saxony and Prussia , with the castle on the other side of the river remaining with Saxony, while all of the monastery property came to Prussia.

As a result of this situation the pen was about to dissolve. King Friedrich August I secured the continued existence of the charitable monastery in its previous manner. In the Upper Lusatian Convention of 1819, regulation of this particular matter was suspended. With the Joachimstein Convention of 1828, both states agreed that the foundation would be exclusively subject to Saxon sovereignty, while the properties were subject to the respective state sovereignty and jurisdiction in accordance with the demarcation of 1818. The profit participation rights and the administration of the foundation jointly regulated the estates of the Saxon and Prussian Upper Lusatia.

Up until the end of the Second World War, one wing of the palace was also used to accommodate groups of children, e.g. B. from Hamburg from Kinderlandverschickung . The existence of the monastery ended in 1945 when the border was drawn along the Oder-Neisse line . The canonesses were driven out and the castle looted. The buildings were no longer used and fell into disrepair. In 2003 the castle was renovated. Since the investor Marek Glowacki , who wanted to turn the castle into a hotel and conference center, died unexpectedly in 2004, only a few outbuildings had been rebuilt and the facades and roofs of the main building renovated at a cost of around 7 million euros.

The brother of the founder Joachim Siegismund, the novelist and historian Heinrich Anselm von Ziegler und Kliphausen was born in the old moated castle .