Just as humans have been using the dog's diversity for centuries, an addictive drug detection dog uses the pronounced sense of smell in connection with the play instinct to track down drugs.

The substances to be detected each have an individual odor that is not - or not always - perceptible to humans. One speaks here of the lead substance that the drug contains. The effect of a certain drug, on the other hand, is caused by its active substance.

In the training to become an addictive drug detection dog, the sense of smell is addressed, and gaming behavior is used for motivation. This means that the Bringsel (toy) is filled with drugs and is only played for the time being. In the course of the game , which gives the dog pleasure, he is confronted with the smell of the individual drugs without coming into contact with them. In the further steps this souvenir is then hidden and the dog has to look for it in order to continue playing. In this way, the dog not only gets to know the individual smells of the various drugs, but also learns that his toys can be hidden in a place that is inaccessible to him. In this case, the dog should "show" his handler where his bringsel is hidden.

The dogs are usually trained on the basic substances of cocaine, heroin, cannabis and amphetamines.

The dog learns to indicate to its handler by means of a certain behavior known as reporting behavior that it smells of drugs in a certain place or hiding place. A distinction is made between active and passive display behavior of the dog (see display behavior). In the event of training, the dog is immediately rewarded with its toy. In an emergency, the drug found is first removed and exchanged with his toy. 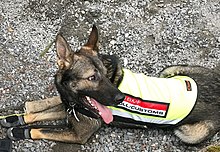 Tracker of the Austrian customs

The dog must not come into direct contact with the addictive substances during his work. Just as the drugs can be harmful to a human, they can also be extremely unhealthy for a dog. With so-called hard drugs, such as heroin or cocaine, it might even be fatal for the dog if he only ingested small amounts with his nose or tongue. This is why it is wrong to assume that a dog must be addicted in order to be able to track down drugs.

To be on the safe side, the dog handlers usually have a special "first aid kit" with them, which is used if the dog has bitten into a packet of drugs. Since cannabis can already lead to circulatory failure of the dog, in the event of contact or possible ingestion of drugs, the dog handler places a syringe in the neck of the animal, which causes immediate vomiting; in addition, a veterinarian is consulted immediately.

A major problem caused by the conditioning of most dogs on large drug bandwidths occurs - as has happened in various US states - with the legalization of marijuana . The conditioned behavior can no longer be trained afterwards. From a legal point of view, however, it leads to massive problems if the dogs lead to numerous searches of innocent people. This was found by the Colorado Supreme Court in 2019 . According to a USA Today report , the New York State Police have banned marijuana from their sniffer dog training programs. An innovative solution could be to use specially trained honeybees in police drug searches, as well as in airports and customs offices. At the European Police Congress in February 2019, a bachelor thesis on this topic was awarded the “Future Police Work Prize”.