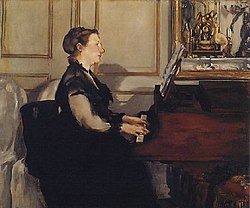 The Suzanne Leenhoffs family moved to Zaltbommel during their childhood , where their father was a church musician. According to Dr. A. van Anrooy is said to have heard Franz Liszt play his father's carillon on his way from Bonn to London in the late summer of 1845 and then returned to the Leenhoff house. On this occasion he was so enthusiastic about the piano playing of his daughter Suzanne that he recommended her to continue her education in Paris. According to Anrooy, Liszt also wanted her to find suitable teachers and students necessary for a living.

Since 1849 Eugène Manet and Gustave Manet (1835-1884), the younger brothers of Édouard Manet, were among these students . Their son Léon Leenhoff was born on January 29, 1852 . Suzanne named a certain Koëlla as the father, about whose identity nothing is known. Édouard Manet became Léon's godfather. Many authors have assumed that Édouard Manet was Léon's father; more recent research suggests a paternity of Auguste Manet, the father of Édouard Manet. Suzanne and Léon lived together with Suzanne's brothers, the sculptor Ferdinand Leenhoff and the painter Rudolph Leenhoff and their grandmother in an apartment. Her sister Mathilde, who was married to the sculptor Joseph Mezzara , also lived nearby .

It is unclear when the relationship between Suzanne Leenhoff and Édouard Manet began, which he hid from the public for years. The two married on October 28, 1863, a year after the death of Manet's father. Charles Baudelaire wrote to a friend in surprise in October 1863: “Manet has just given me completely unexpected news. Tonight he is going to Holland and will be returning from there with his wife. ... she is apparently beautiful, very nice and a very great artist ”.

From then on, Suzanne Manet lived in a household with her husband, mother-in-law and their son Léon. However, Léon was introduced to the family and Parisian society as Suzanne's younger brother by the name of Léon Leenhoff. She herself ran a weekly salon , which she accompanied musically. Her favorite composers were Robert Schumann , Ludwig van Beethoven and Richard Wagner .

After Edouard Manet's death in 1883, Suzanne first lived in the house of her cousin Jules de Jouy in Gennevilliers, then in Asnières and then with her son at 94 Rue Saint-Dominique in Paris. Due to financial difficulties, she was gradually forced into old age to separate from the pictures of her husband. As a memento, she had copies made of some pictures, which after her death appeared on the art market as supposed originals.

Suzanne Manet is represented in numerous paintings by Edouard Manet, including the following major works: