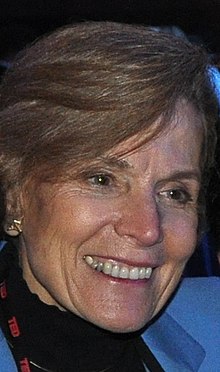 Sylvia Alice Earle (born August 30, 1935 in Gibbstown, New Jersey ) is an American oceanographer and environmental activist for the protection of the seas. She was the scientific director of the state-owned National Oceanic and Atmospheric Administration NOAA, advised NASA and has worked as a researcher for the National Geographic Society since 1995 . As the leader of more than 60 ocean expeditions, she spent over 7,000 hours underwater.

Sylvia Earle communicates with an aquanaut in the Tektite underwater station.

When Sylvia Earle was playing on the beach in New Jersey when she was three, she was swallowed up in a wave. When her mother hid it, the child beamed and wanted to go back immediately. Looking back, that was her initial experience for her life goal: to spend as much time as possible under water.

In 1955 she made her bachelor's degree and in 1956 her master's degree from the University of Florida. In 1966 she received her PhD in Duke. Then, until 1981, she worked as a researcher at Harvard. From 1980 to 1984 she advised the US government as an employee of the NACOA. In 1985 she founded Deep Ocean Engineering with her husband, underwater engineer and designer Graham Hawkes . In 1987 the company built a research submarine called the "Deep Rover". She left the company in 1990 to return to government, this time with NOAA. In 1992 she founded another company, Deep Ocean Exploration and Research , which is now run by her daughter Elizabeth. Today Sylvia Earle is a member of the National Geographic Society and advocates marine conservation through speeches and publications.

In 1970 Sylvia Earle led the first women's team at the American underwater project Tektite , where the aquanauts researched underwater for several days. In 1979 she set a world record with a dive to the seabed at a depth of 381 m, which earned her the title "Her Deepness" (meaning: "Your depth"). Earle holds the world record for solo diving in a capsule at 1 km. In 1998 she was the first "Hero of the Planet" in Time Magazine . Sylvia Earle was awarded the Dutch Order of the Golden Ark . In 2009 she received the TED innovation conference award and then founded Mission Blue , an activist group that aims to set up water protection areas ("Hope Spots") worldwide. In 2014 she received the Champions of Earth Award and in 2018 she received the Princess of Asturias Prize for Unity.

In 1986 she was elected a member of the American Association for the Advancement of Science .

Sylvia Earle considers the ocean to be much worse mapped than planets like Mars and the Moon. The biodiversity is much more pronounced under water than in the air and on land. Nevertheless, since the 1960s she has noticed massive destruction of the deep sea biotope in her diving career. Most of the coral reefs she saw at the time have completely disappeared. Earle condemns all oil drilling activities in seas like the Gulf of Mexico , advocated the inclusion of oceanographic data in Google Earth , and wrote numerous scientific articles and books on the protection of the oceans. Her personal motto is: "I want to get out into the water."