Tana bru ( North Sami Deanu šaldi ) is the largest town and the administrative center of the municipality of Tana in the east of the province of Troms og Finnmark in northern Norway. In 2019 the place had 757 inhabitants.

When the German Wehrmacht withdrew in 1944, the entire town, including the central town at the time, which was a little further north, was burned and destroyed.

Tana bru as a location became a leader in the region in the 1960s and 1970s. The central meeting point in town is Tana Miljøbygg with exhibitions, a cinema, library and cafeteria. 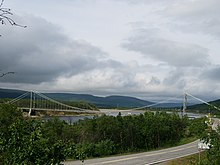 The Tana Bridge ( Norwegian Tana bru ), which gave the place its name.

The old bridge was also blown up when the German Wehrmacht withdrew. The current bridge was built in 1948 as a suspension bridge and has a main span of 195 meters.

In 2016, the construction of a new bridge began to replace the previous bridge, as it no longer meets today's requirements. An asymmetrical cable-stayed bridge with only one pylon and a main span of 234 meters is planned. The new bridge is scheduled to open to traffic in 2020.

On the east side of the bridge is the Flua 44 monument . This is made of metal from the bridge that was destroyed in the war and represents a fishing rod. The actual rod is 12 m long and the fly is one meter. The work of art symbolizes that the Tanaelva is good salmon water .

The European roads E6 and E75 both run through the town and over the bridge.