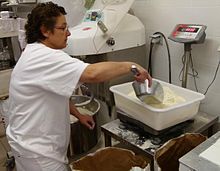 The tare , also tare weight (from Arabic طرح, DMG ṭarḥ  'deduction') is the difference between the gross or total weight and the net or net weight of a weighing item. It is required for weighing objects that cannot be weighed independently. This is particularly the case with bulk goods , liquids and gases , but can also be necessary for piece goods in large containers .

In trade , the tare describes the weight of the packaging of a product. The weighing of the packaging when selling loose goods by weight , the so-called "gross-for-net sale", is not permitted in German retail according to § 380 HGB and § 26 of the Measurement and Calibration Ordinance and is an administrative offense. Only very light packaging materials such as thin paper or thin foil can also be weighed. The same provisions also apply in Switzerland. In Austria, the packaging can currently (as of June 2010) be weighed, but scales used in trade must be equipped with a tare setting. There are plans to introduce the statutory requirement for net weighing in Austria, but the Chamber of Commerce is resisting this. The tare function allows the display to be set to zero after the packaging has been placed. Another possibility of electronic scales are storage locations for fixed packaging weights.

The price determination for the packaging weight is a matter of agreement among traders. The tare can be treated as the weight of the goods or calculated separately. Since it is not always possible or advisable to separate the packaging from the product when making a separate calculation, a distinction is made between the following tare types:

The percentage tare is also the basis for the rates of the Swiss tare ordinance. Switzerland is the only trading nation that still uses weight as the basis of assessment for customs clearance . Imported goods are cleared according to their gross weight if they are equipped with solid transport packaging. In the case of insufficiently protected or completely unpacked goods, the ordinance stipulates tares that are added to the net weight.

In logistics , the means of transport is weighed during the loading and unloading process. The gross weight is the weight of the loaded, the tare that of the empty means of transport. The difference between the first and second weighing is the net weight of the load. In this way, for example, trucks and containers are weighed. So-called fixed tare values ​​are also often entered, i.e. a fixed empty weight. The second weighing can then be omitted. Such values ​​must, however, be reliable and up-to-date and, in the case of motor vehicles, also take into account the weight of the fuel.