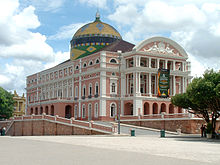 The Teatro Amazonas in Manaus 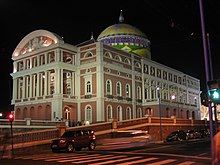 The Teatro Amazonas is an opera house in Manaus , Brazil . The construction was financed by the income from the rubber boom and inaugurated on December 31, 1896.

The history of this opera house began when the MP Antônio José Fernandes Júnior proposed the project in 1881 and it was approved. The Gabinete Português de Engenharia e Arquitetura (Portuguese Office for Engineering and Architecture) from Lisbon was commissioned to plan the architectural work in 1883 . The groundbreaking ceremony was delayed by a year due to debates about funding. Construction work was suspended between 1886 and 1893 for the same reason. Architects, builders, painters and artists were hired from all over Europe. The Paris-based Brazilian Crispim do Amaral from Pernambuco designed the interior of the theater, while the Italian Enrico Mazolani took care of the exterior. The house was inaugurated on December 31, 1896, the first opera performance was on January 7, 1897, the premiere of the opera " La Gioconda " by Amilcare Ponchielli . The neo-baroque main hall is designed for 701 listeners. The ceiling is adorned with the painting “A Glorificação da Belas Artes na Amazônia” (To the glory of the fine arts in Amazonia ) by Domenico de Angelis . The paving stones around the building were specially made from a mixture of sand and rubber so that the demonstrations would not be disturbed by the horse-drawn vehicles driving by. Much of the building materials were imported from Europe. For example, the tiles of the dome were imported from Germany and the paving stones in front of the theater from Portugal.

Due to the fall in the rubber market, the opera house saw its last performance in 1907. In 1929 and 1975 some unsuccessful renovation work was carried out. It was not until the late 1980s that the opera house was completely and successfully restored. Particular challenges were the humid climate with over 165 rainy days a year and the threat from termites . More than eight decades after the last performance, the opera finally reopened on March 17, 1990 with Plácido Domingo and Marcia Haydée .

The 1982 film Fitzcarraldo by Werner Herzog made the Teatro Amazonas famous again in Germany. In addition, Sharon Lockhart released the film Teatro Amazonas in 1999 and had an exhibition about this opera house at the Wolfsburg Art Museum from June to August 2000 .

In 1996 the German violinist Michael Jelden founded the largest music festival in Latin America ( Festival de Manaus ) in the Teatro Amazonas, which brought opera back to the theater for the first time in almost 90 years. After Jelden the festival two years as director had cared for, the line is now in the hands of the Brazilian Ministry of Culture and the National Cultural Foundation Funarte .

Christoph Schlingensief staged Wagner's Fliegende Holländer in Manaus in 2007 . The premiere at the Teatro Amazonas was on April 22, 2007