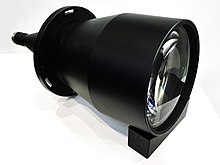 Telecentric beam path on both sides

Telecentric lenses are special optical lenses that are characterized by the fact that the entrance or exit pupil is at infinity. A distinction is made between object-side, image-side and bilateral telecentricity.

Object-side telecentric imaging with a lens and a diaphragm (object on the left, image on the right)

A beam path telecentric on the object side is used to capture objects without perspective distortion. The entrance pupil is at infinity, so that the main rays in the object space all run parallel to the optical axis. The front lens must therefore be at least as large as the object to be imaged.

Another property of this beam path is that the image scale does not change when the object is axially displaced. The image always appears the same size regardless of the object distance. However, it becomes blurred if the object lies outside the ideal object plane. This property is used in measuring lenses to allow a certain positional tolerance of the test part. The tolerable distance range is determined by the depth of field and is specified in the data sheets. With microscopes, the constant image scale enables convenient focusing.

The easiest way to achieve a beam path telecentric on the object side is to use a single converging lens with an aperture diaphragm in the focal plane on the image side .

Telecentricity on the image side

A beam path that is telecentric on the image side is primarily used to parallelize the beam path . The exit pupil is at infinity, so that the cones of rays all hit the image plane perpendicularly, hence the system is afocal . The simplest structure for this consists of a single converging lens with an aperture diaphragm in the object-side focal plane. In contrast to the purely object-side telecentricity, the tolerable object position is not limited here by the depth of field. You can refocus the image plane without changing the image scale. The simplest structure for this consists of two converging lenses, between which an aperture diaphragm is attached. The distance between a lens and the aperture diaphragm must correspond to the respective focal length . A lens that is telecentric on both sides theoretically has no geometric imaging errors , such as distortion .

In the case of digital camera lenses, telecentric lenses with pinholes are generally not used. There would be little additional benefit compared to low-light (20 mm focal length with f / 4 on 1/3 "sensors), huge (10 kg) and more expensive (€ 20,000) lenses. Nevertheless, the beam paths can be designed in such a way that all light rays are largely perpendicular to the Surface of the image sensor to reduce aberrations when the filter glasses break in front of the sensor.

They are used in applications where they are necessary: