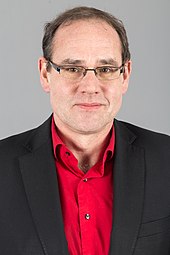 Tilo Kummer (born June 29, 1968 in Dessau ) is a politician of the Die Linke party . From 1999 to 2019 he was a member of the Thuringian state parliament . He won the direct mandate in the constituency of Hildburghausen I in 2009 and was elected from the state list in 2014. His areas of expertise are environmental and agricultural policy . He was chairman of the committee for agriculture, forestry, environment and nature protection in the Thuringian state parliament and member of the administrative board of the Thuringian forest institute.

In 1987, Kummer graduated from high school. He then served as a non-commissioned officer in the Berlin Guard Regiment Feliks Dzierzynski , which belonged to the Ministry for State Security . In 1990 he was a production worker at Halle Fisch GmbH. Until 1995 he studied fish and water management at the Humboldt University in Berlin , graduating with a degree in fisheries engineering. Kummer practiced care for the elderly as part of long-term care insurance from 1995 to 1999. From 1997 to 2001 he also owned a pet shop . He has been running a sideline agricultural business since 2014 .

Kummer was the environmental policy spokesman for his parliamentary group and is a member of the district council and Hildburghausen city council. He heads the Hildburghausen Theater Association and is the leader of the Thuringian Friends of Nature working group .