Tylecodon viridiflorus grows as an upright, slightly branched shrub and is up to 35 centimeters high and 20 centimeters in diameter. Some main shoots with a diameter of up to 1 centimeter arise from the slightly bulbous base with a diameter of up to 1.5 centimeters. They have a gray bark that peels off lengthways. The young shoots are initially brown and fade with age. The ascending to spreading leaves are very dense and elliptical, obverse lanceolate to broadly ovate and flat. They are covered with glandular hair, are 2 to 5.5 inches long and 0.8 to 3 inches wide and are sometimes three-lobed. The top of the leaf is often rutted in shape, the leaf is wedge-shaped at the base and the tip is blunt to pointed. 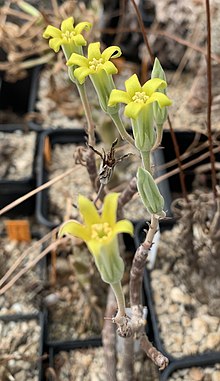 The inflorescence is up to 4.5 centimeters high and consists of thyrses with 1 to 3 monochasias , each bearing 1 to 2 upright flowers. The tubular corolla is 14 to 20 millimeters long and 5 millimeters in diameter. It is greenish in color and the tips, which are up to 7 millimeters in size, are later bent back. Winged seeds are formed.

Tylecodon viridiflorus is widespread in South Africa in the province of North Cape in the Succulent Karoo in crevices. It was first described in 1977 by Helmut Richard Tölken as Cotyledon viridiflora . Tölken himself placed the species in the genus Tylecodon in 1978 .

Together with Tylecodon torulosus and Tylecodon longipes , this species forms a group of related species that are the only ones within the genus that can rarely develop trilobed leaves.