The USS Daniel Webster (SSBN-626) was a nuclear-powered submarine of the Lafayette-class . The boat was a so-called Ship Submersible Ballistic Nuclear , a submarine specially designed for launching ICBMs . It was named after the United States Secretary of State Daniel Webster . 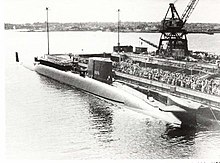 USS Daniel Webster with down oars at the bow

In February 1961 the order for SSBN-626 was given, in December of the same year the keel was laid at the Electric Boat shipyard . In April 1963 the boat was launched, a year later, after completion of the final equipment and the shipyard test drives, the Webster was officially put into service with the United States Navy .

The Daniel Webster was, as the only boat in her class, equipped on a trial basis with the depth rudders on a small tower on the bow instead of the usual standard on the sail . However, as this configuration slowed down the speed, it was removed during the first overhaul and replaced with traditional oars.

After a service period of 26 years, the Daniel Webster was decommissioned. Instead of being dismantled, however, the submarine was converted into a moored training ship and received the designation MTS-626 . As such, the Webster is located near the Charleston Naval Shipyard in Charleston , South Carolina and is used to train new seafarers, especially in reactor operation.

Submarines of the Lafayette class