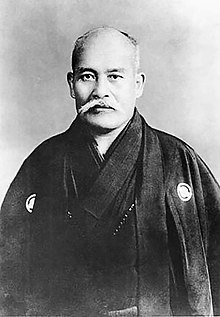 Ueshiba Morihei in his mid-fifties

Aikidōka often calls him genannt Sensei ( 翁先生 ), which means something like old master or venerable teacher . However, this title was mainly used in spoken Japanese. This led to a different interpretation of Ō sensei than 大 先生 , i.e. great master , which is predominant in the West today and is also used in part in Japan.

He was the fourth child and eldest son of a wealthy family. The father Ueshiba Yoroku was a respected farmer and his mother Itokawa Yuki came from a noble, land-owning family.

At the age of about seven, Ueshiba studied Confucian classics and Buddhist scriptures at his father's behest . His father taught him sumo and swimming.

Ueshiba graduated from secondary school in Tanabe and then went to middle school at the age of seventeen, which he did not attend for long and instead decided to attend the Yoshida Commercial School .

Worked as a trader and started studying combat

In 1902 he resigned from the local tax authority, where he began his service while attending school, and went to Tokyo , where he ran a stationery and school supplies shop in the commercial district of Nihombashi . At the same time he began to study combat in traditional Jūjutsu and Kenjutsu ; because of a beriberi disease, however, he had to stop and return to Tanabe. There he soon married Itokawa Hatsu (* 1881). In 1903 Ueshiba Morihei joined the army in Osaka as a volunteer and a few years later took part in the Russo-Japanese War .

After he was promoted to sergeant major for his bravery and courage on the battlefield, Ueshiba was sent on home leave. He used this to learn the Gotō style of Yagyū-ryū Jūjutsu in the Nakai Masakatsu Dōjō .

In 1907 the army released him. He returned to Tanabe, where he worked on the Ueshiba family farm. At the same time, Ueshiba Yoroku hired the Jūdōka Takagi Kiyo'ichi to teach Morihei in the barn that was specially converted into a dōjō.

In 1912 Ueshiba Morihei took part in a government program and relocated with other colleagues to the northern part of the island of Hokkaidō . In addition to his work as a farmer, Ueshiba campaigned for social living conditions such as improved living conditions and the formation of a primary school in the settlement in the years to come. During this time he met the Daitō-ryū Aiki-jūjutsu master Takeda Sōkaku , with whom he obtained his Daitō-ryū-Jūjutsu diploma after intensive training.

Ueshiba Morihei cultivated friendship with Deguchi Onisaburō , the co-founder of the religious Ōmoto-kyō sect . Especially after his father's death on January 2, 1920, he was guided by Deguchi in his search for a spiritual life. Ueshiba moved to Deguchi in Ayabe , where Deguchi supported him in building a dōjō that was to serve as the origin for the Ueshiba Academy. At first Ueshiba only taught the followers of the Ōmoto-kyō sect. After a while, word got around that an extraordinary budo master was teaching Ayabe. Thus more and more people who did not belong to the sect enrolled in the academy.

Around 1921, after the first Ōmoto incident in which Deguchi and other cult followers were arrested, Ueshiba began to make his exercises more spiritual. He deviated more and more from the classical style of Yagyu-ryū and Daitō-ryū and developed his own style on the basis of proven principles. He officially called this style Aiki-Bujutsu . In the population he was known as Ueshiba-ryū Aiki-Bujutsu .

From then on, Ueshiba Morihei refined his martial arts until his death. The spiritual development came more and more to the fore and also had an effect on the techniques, which is due not least to various drastic experiences. In the spring of 1925, after a fight during which he could foresee the opponent's movements, Ueshiba experienced an enlightenment about which his son Kisshomaru reports: “ Suddenly he had the feeling of bathing in golden light that poured over him from the sky "And he became" aware of the unity of the universe with self, and in turn understood the other principles on which aikido is based. “He changed the name from Aiki-Bujutsu to Aiki-Budō , as the Dō refers to the philosophical principles contained in the martial arts. In the late 1920s, Ueshiba held martial arts courses in Tokyo, where he maintained the Kobukan-Dōjō in the 1930s. With the participation of Japan in the Second World War , Ueshiba withdrew to Iwama , where he turned back to agriculture and opened another dojo. The name Aikido was first mentioned around 1941.

Harmony and love as a means

After his last war mission in Manchuria , Ueshiba Morihei developed into a very peaceful person. An attitude that also flowed into the philosophy of Aikido. In 1961, Ueshiba Morihei was invited to Hawaii and said that he had come to Hawaii to build a "silver bridge". He sees the harmony and love contained in Aikidō as a means to unite the people of the world.