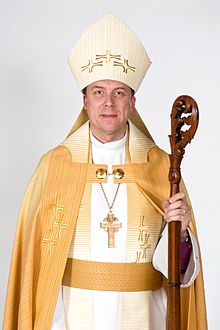 Urmas Viilma (born August 13, 1973 in Tallinn ) is an Estonian Lutheran clergyman and archbishop of the Estonian Evangelical Lutheran Church (EELK).

Urmas Viilma graduated from Saue Gymnasium in Harjumaa in 1991 . From 1991 to 1998 he studied theology at the Theological Institute of the EELK and graduated here with a master's degree in theology. He was ordained a deacon on May 2, 1993 and a pastor on September 15, 1998. Comparable to the vicariate in German Protestant regional churches, he was assigned to the Michaelskirche in Keila in 1993 as a deacon and from 1995 to 1998 to the Jakobikirche in Pärnu-Jaagupi . From 1998 to 2005 he was a pastor here.

In 2010 he was elected pastor of the Cathedral Church in Tallinn and was introduced to his office on February 21 by Archbishop Andres Põder .

He worked in various tasks in the church administration, such as assessor (2005 to 2008) and chancellor (since 2008) of the consistory of the EELK and as a member of the supervisory board of the church bank and the property management of the EELK.

On November 26, 2014, he was elected to succeed Andres Põder as Archbishop of the EELK. His inauguration took place on February 2, 2015 in Tallinn Cathedral .

From 2001 to October 16, 2013, he was a member of the conservative Isamaaliit party or its successor Isamaa ja Res Publica Liit . and is now independent.