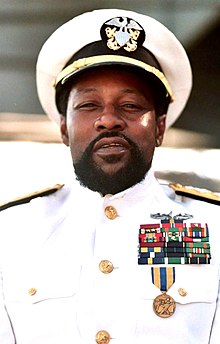 Victor Edward Willis (born July 1, 1951 in Dallas , Texas ) is an American singer, songwriter and actor . He became known as the lead singer of the disco band Village People . His role was the " cop " and " naval officer ".

As the son of a Baptist minister, he developed his vocal skills in his father's church. Willi's powerful R&B voice had a decisive influence on the sound of the Village People and was highly recognizable from the disco era. After taking acting and dance classes, he went to New York and joined the prestigious Negro Ensemble Company . He has appeared in numerous musicals and plays, notably in the 1976 Broadway production The Wiz, and subsequently its Australian production.

In the mid-1970s he wrote and recorded some music demos and was introduced to the disco scene by the French disco music producer Jacques Morali. Morali, who described Willis as a "young man with the great voice", approached him and said, "I had a dream that you were the lead singer on my album and that it would be very, very successful."

Willis agreed to take on the lead vocals and background vocals for the not yet existing music concept group Village People . Their first album with the hits San Francisco (You've Got Me) and In Hollywood (Everybody Is a Star) quickly became a huge success in the emerging disco era. After an offer from Dirk Clark to have the music group appear on the American TV show American Bandstand , a “real” music group had to be created around Willis quickly so that the performance could take place. In music magazines they looked for "macho" singers with beards who can dance too.

Willis soon wrote one hit after another, which Morali co-wrote and, above all, produced. Village People quickly rose to the top of the charts with chart breakers like "Macho Man", " YMCA ", "In the Navy" and "Go West".

When the poorly executed preparations for the musical film Can't Stop the Music began in 1980 , Willis left the group. Although he does not appear in the film, he wrote the lyrics to two of the film songs Magic Nights and Milkshake . Can't Stop The Music became one of the biggest Hollywood movie flops of all time.

After the departure of Willis, Village People never had another hit. In an attempt to "recapture the magic of old times," Morali and Belolo convinced him to rejoin the group and record the album Fox On The Box . The album was unsuccessful and so in 1983 Willis left the group on good terms.

Willis appeared in the media several times because of drug excesses and the ensuing arrests. After serving his prison sentence, he consented to drug rehab in 2006 at the Betty Ford Clinic . After his withdrawal in 2007, he made his first statement in the press in 25 years: “... the drug nightmare has disappeared from my life ... the fog caused by drugs is over, I think and see more clearly than in previous years ... I'm looking forward to the second, drug-free part of my life ”.

Since leaving the Village People, Willis has repeatedly turned down offers to make new recordings or perform one of the old hits. After 28 years of absence, he was back on stage for the first time in 2007 and began preparations for an international comeback tour for 2009. In July 2008, he had to have knots removed from his vocal cords at the San Diego Hospital.

In addition to the Village People, Willis was also a co-writer for other artists, such as the Ritchie Family and Patrick Juvet, who is more known in France .

Willis was married to Phylicia Ayers-Allen, known as Phylicia Rashād . She played Claire Huxtable on The Cosby Show from 1984 to 1992 . He also wrote her the lyrics for her album Josephine Superstar . On November 17, 2007, Willis married a second time. His wife Karen is a lawyer and has a Masters degree in Economics.