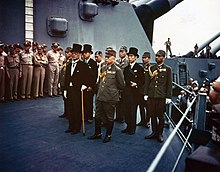 Japanese delegates aboard the USS Missouri to formally sign the surrender on September 2, 1945

At the same time, the Soviet Union kept its commitment to the Western Allies made during the Yalta Conference to launch an offensive against Japan and its allies in Europe in the Far East 90 days after the end of the war . With Operation August Storm , the Red Army marched into Manchuria (or the puppet state of Manchukuo ) annexed by Japan on August 8th with over a million soldiers and soon advanced to the Japanese colony of Korea (Chōsen) and the Kuril Islands .

On August 15, 1945 at 12:00 noon Japanese Standard Time, the Japanese radio then broadcast the oral address by Emperor Hirohito to the Japanese people ( Gyokuon-hōsō ) that Japan would accept the terms of the Potsdam Declaration . Earlier on the same day, the Japanese government had announced this surrender to President Harry S. Truman via the Swiss embassy in Washington .

The formal signing of the surrender took place on September 2, 1945 aboard the battleship USS Missouri . At the same time, the official occupation of Japan by Allied forces began , which lasted until the end of April 1952. Japan previously renounced its role as imperial supremacy in South-East Asia in the peace treaty of San Francisco , which also ended the Second World War in the Pacific region ( Pacific War ) diplomatically.

Victory over Japan Day in the USA

In the United States, the annual memorial day is August 14th because that day was the local date at the time of the surrender message. Officially, the holiday is usually referred to as Victory Day , since the end of World War II was sealed with the defeat of the last Axis power . The picture VJ Day in Times Square by Alfred Eisenstaedt , which was taken on August 14, 1945 and shows a sailor who spontaneously kisses a nurse, has become one of the most famous photos in connection with VJ Day and a symbol of joy at the end across the country of the war. The same scene was also photographed by the US Navy photographer Victor Jorgensen .

According to the Providence Journal , the holiday was abolished as it no longer wanted to upset Japan. Japan had become an important ally and a pre-eminent economic power. In 1975, Arkansas became the penultimate state to abolish this holiday. Only in the US state of Rhode Island is Victory Day a public holiday and is celebrated on the second Monday in August.

In both states of Korea ( North Korea and South Korea ), the day of the Japanese surrender is a national holiday and is known as Gwangbokjeol .

Designations for the end of the war in Europe

For the end of the fighting against Germany after its unconditional surrender on May 8, 1945, the designation Victory in Europe Day was coined in the USA . In other states, this day is commemorated either as Liberation Day or on May 9th as Victory Day .