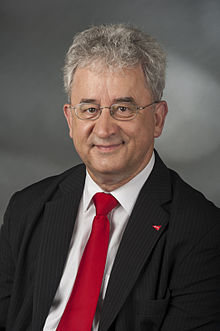 After graduating from high school in 1974 at Saarbrücken Castle, Schneider began studying social work in 1976 at the Catholic University of Applied Sciences in Saarbrücken, which he completed in 1980 as a qualified social worker (FH). He then worked until 1996 as a lecturer in professional adult education at BFW Saarland GmbH . From 1996 to 2005, Schneider was the Federal Managing Director of the German Professional Association for Social Work (DBSH). During his time as Federal Managing Director, Volker Schneider was also a European and world delegate at the International Federation of Social Workers (IFSW). In 2010 he joined the parliamentary group The Left, where he initially headed the federal-state coordination and from 2014 the group management of the due cooperation with the Stasi resigned Ruth Kampa took over.

Schneider was one of the founding members of the WASG in 2005 and was DIE LINKE until it was founded. Saarland representative in the WASG regional council. In the DIE LINKE party. From 2011 to 2012 he again took over the representation of the Saar regional association in the successor body, the federal committee.

In the 16th legislative period (2005–2009), Volker Schneider was a member of the German Bundestag , into which he was drawn as a top candidate via the open state list of the Linkspartei.PDS in Saarland. He was the science and pension policy spokesman for the left-wing parliamentary group and also its deputy parliamentary director . He was a member of the Committee for Education, Research and Technology Assessment and the Council of Elders of the German Bundestag and was a deputy member of the Labor and Social Committees as well as Election Review, Immunity and Rules of Procedure. He also represented his parliamentary group on the Board of Trustees of the Federal Agency for Civic Education .