The Wadi-el-Hol script is a letter script that is known from two inscriptions so far , which are in Wadi el-Hôl ( Arabic وادي الهول Wādī al-Hawl 'Gorge of Terror') in the governorate of al-Wadi al-Jadid, northwest of Luxor in Egypt . The inscriptions were probably made between 1900 and 1800 BC. And would be the oldest known evidence of the use of a letter font. They were in 1999 while surveying an old caravan nRoute between Thebes and Abydos by archaeologists - Team by John Coleman and Deborah Darnell of Yale University in New Haven discovered. 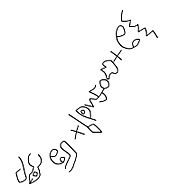 The two previously known inscriptions have 16 (No. 1) and 12 (No. 2) letters with a total of 13 different characters. Due to the similarity with the later Protosinaitic script , the presumed sound values ​​of the characters can be determined with high probability. Only the 2nd or third from last character of inscription 2 is without a direct parallel. For this, David Vanderhooft suggested the sound ġ with reference to the pictogram reminiscent of a yoke and taking into account the acrophonic principle .

This results in the following reading for inscription no. 2: m ġ trh ʿ wtp ġ ʾ l . The first four letters would result in the word mġtr , which can be understood as "supplication" or the like with reference to other Northwest Semitic languages. The last four letters pġʾl could represent a theophoric name meaning “Young Els ” or “Boy of God”. The meaning of the four middle letters remains unclear. It is possible that the h is not to be read alphabetically here, but as a determinative .

The signs are very similar to those of the Protosinaite script , but they were found much further south, in the heart of literate Egypt. The exact content of the texts on two limestones has not yet been clarified, but the (northwest) Semitic words rb ("great, headmaster") and ʾl ("god") can be read. The inscriptions therefore probably do not come from Egyptians, but from Semites from Palestine or Syria who came to the Nile Valley as miners , traders or mercenaries .

Even Brian Colless considers the Wadi el-Hol script as a precursor of alphabetic writing, but gives greater weight to some elements of their hieratic have kept origin. He assumes, for example, like the American biblical archaeologist and philologist William Foxwell Albright (1891–1971) that the letter n comes from the hieroglyph for snake , because the name of this letter was originally Nachasch , the Canaanite word for snake . Possibly the signs stood for more than one consonant each , by representing different words as symbols (cf. German snake, adder , viper , otter ).