Warlubie ( German Warlubien , 1942-1945 Warlieb ) is a village in Powiat Świecki of the Kuyavian-Pomeranian Voivodeship in Poland . It is the seat of the rural community of the same name with about 6500 inhabitants. 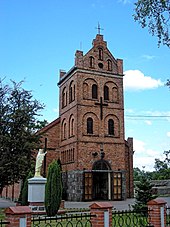 Church of the village

The first documented mention of the place comes from the year 1277 as Warlubie from a privilege of the Duke of Pomerellen Mestwin II. From 1309 to 1466 the place belonged to the domain of the Teutonic Order , afterwards it was part of Poland. Around the year 1820 the village had about 380 inhabitants. In 1920 the place had to be ceded to the re-established Poland as a result of the Versailles Treaty . In September 1939 the place was occupied by German troops . Under the name Warlieb , the place belonged to the district of Schwetz (Weichsel) , province of Gdansk-West Prussia , in the administrative district of Marienwerder until 1945 . After the end of the Second World War , Warlubia was restituted to Poland as Warlubie , to which it has belonged under international law since 1920.