Oil portrait of Sir Walter Scott by Edwin Landseer, around 1824

Waverley or 's is sixty years ago (original title: Waverley, or,' Tis Sixty Years Since ) is the first novel by the Scottish writer Sir Walter Scott . Waverley was published in 1814 and is considered the first British historical novel . In addition, the character of the middle hero is developed here for the first time . 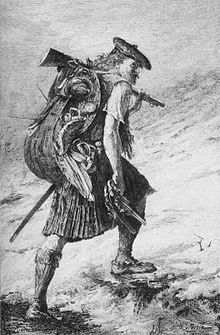 Edward Waverley comes from the English nobility. While his father was making a political career in London as a partisan of the Whigs , at that time the supporters of the Hanoverian monarchs , Waverley was raised by his uncle, who taught him the old Jacobite values, i.e. those of the supporters of the House of Stuart . At the request of his father, Edward began a career as an officer in the British military. Because of a misunderstanding, and because of false accusations he can from a holiday in the Scottish Highlands not return and closes the at that time (1745) erupting in Scotland second Jacobite rebellion on the side of Charles Edward Stuart (Bonnie Prince Charlie ') to which wants to recapture the British throne for the Stuarts with support in particular from the Scottish Highlands from the British dynasty founded in 1714 by the Hanoverian George I. He also takes part in the decisive battle at Prestonpans , which ends with a victory for the Jacobites.

During a later skirmish that the government wins against the insurgents, Waverley is cut off from the rest of the troops so that he can escape undetected. With the help of relationships, he manages to get rid of the false accusations and obtain pardons for his support of the Stuarts.

In the course of the novel, Waverley is torn between conflicting loyalties: the obligations as a British officer and loyalty to the Scots he met, modern Britain and the fascination with the traditional culture of the Scottish Highlands, the sensible-temperate rose and the romantic- radical flora . Often times, Waverley does not act himself, but gets carried away by the events around him.

Ultimately, Waverley stands on and by the side of government, progress and Rose , but the novel also expresses understanding for the other side - probably the position of the author himself, who nevertheless supported the British state with a lot of sympathy for old Scotland and the supported the Hanoverian rulers. His extraordinarily popular novels, which demonized neither side and also showed the tragedy and the failed but not unfounded aspirations of the ultimately inferior side, have thus also contributed to the reconciliation of still warring sections of the population.