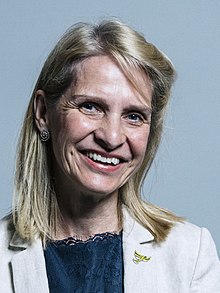 Wera Hobhouse (born February 8, 1960 as Wera Benedicta von Reden in Hanover ) is a German-British politician who is a member of the British lower house for the Liberal Democrats .

As a student, Wera von Reden was active in the protests against the repository for high-level radioactive waste in Gorleben . She studied history and art history at the University of Münster and at the École des Beaux Arts in Paris and graduated with a master's degree from the Free University of Berlin . In 1989 she married the English entrepreneur William Hobhouse and they have four children.

Until 1999 Wera Hobhouse lived with her family in Liverpool and then in Rochdale , where William Hobhouse runs a factory for textile chemicals . Hobhouse and her husband were already involved in local politics in the Liverpool region.

After moving to Rochdale, Wera Hobhouse was elected Councilor in the Metropolitan Borough of Rochdale in 2004 and worked against the development of an industrial wasteland contaminated with asbestos . She left the Conservative Party in 2005 and became a member of the Liberal Democrats . Hobhouse received British citizenship in 2007. In 2010 she was re-elected as councilor for the Liberals, but was unsuccessful as a candidate in the British general election in one of the constituencies in Rochdale that same year.

In 2014 Hobhouse moved with the family to Bath , where they ran unsuccessfully in the constituency of Bath and North East Somerset in the general election that same year . In the lower house elections in 2017 , she was able to conquer the lower house previously held by the Conservatives for Bath and has been a member of the lower house since then . Hobhouse acts as an opponent of Brexit in the Brexit parliamentary committee. In 2018, she introduced legislation against sexual harassment through upskirting .