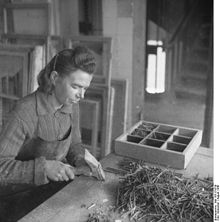 Sub-areas of reuse are:

Reuse serves to avoid waste in accordance with the European Waste Framework Directive . In national legislation, reuse is defined in several laws. The definition of the Circular Economy Act is as follows:

"Reuse within the meaning of this law is any process in which products or components that are not waste are used again for the same purpose for which they were originally intended." KrWG (as amended on February 24, 2012) §3, (21)

"Reuse within the meaning of this law includes measures in which the old devices or their components are used for the same purpose for which they were manufactured or placed on the market." ElektroG (as amended on February 24, 2012) §3, (6 )

Old devices are electrical and electronic devices that are considered to be waste.

The reuse of objects is associated with additional effort compared to recycling . Additional care must be taken during storage and transport , and cleaning is mandatory in most cases. Just like the repair of the item, this is part of the “preparation for reuse” in accordance with the Recycling Management Act.

Civil servants who were affected by the 131 Act of 1951 were allowed to continue their official title with the addition "for reuse (z. Wv.)".