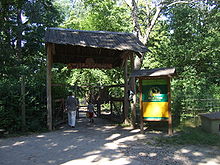 Entrance to the wildlife park. 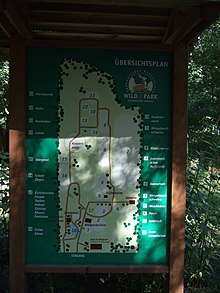 General plan of the wildlife park.

The city of Frankfurt only supports the park with a grant of 9,000 euros per year as well as part of the financing of the wage costs of the park manager.

Many animal species move freely in the wildlife park. Necessary enclosures are spacious, animal-friendly and species-appropriate under natural conditions. There is also a pond landscape, a petting zoo and a small beekeeping facility.

In 1880 a firing range for the grenadier barracks of the imperial German army was set up on the site. After 1945 to 1994 the shooting range was used by the group of the Soviet armed forces in Germany . There were also pigsties and a greenhouse. After 1994 the site lay fallow and quickly overgrown. There were suspected military contamination such as duds. The area was converted into a wildlife park by the Friends of Wildlife Park Frankfurt (Oder) eV founded on July 1, 1999 with the help of the International Federation . In September 1999 the first animals were settled in the meanwhile cleared, renatured and fenced wildlife park area: around 40 fallow deer and three wild boars. The official opening took place on June 1, 2000. Since January 2006 the Gronenfelder Werkstätten gGmbH have been the sponsor and operator of the wildlife park.