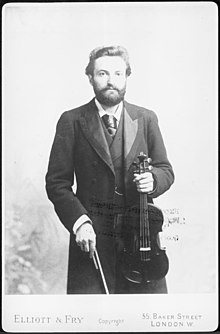 Hess studied violin with his father, who was a student of Louis Spohr , and with Joseph Joachim . At the age of 19 he became concertmaster in Frankfurt a. M., moved to Rotterdam in 1886 in the same capacity. In 1888 he followed a call to England. From 1895 he was first violin professor at the Cologne Conservatory, first violinist of the Gürzenich Quartet and concert master of the Gürzenich Concerts . Between 1904 and 1910 he was concertmaster of the Boston Symphony Orchestra and violin teacher at Harvard University . From 1910 he was a professor at the Berlin University of Music . His students included u. a. the violinist Adolf Busch , the longtime conductor of the Boston Pops Orchestra Arthur Fiedler , the Greek composer Nikos Skalkottas and the Korean violin virtuoso Byeongso Ahn . Max Bruch dedicated the concert piece for violin and orchestra to him in 1910 . Hess also played the solo part in the world premiere of Bruch's double concerto for clarinet, viola and orchestra , as well as the world premiere of Felix Woyrsch's violin concerto in Altona in 1903 . He found his final resting place in the south-west cemetery in Stahnsdorf .