Ypi was born in the Ottoman Empire as the son of the landowner Asilan and his wife Zavalani. He graduated from Istanbul University .

From 1920 to 1921, Xhafer Bej Ypi was the Minister of the Interior and Minister of Justice of the Principality of Albania . He also held the post of Minister of Public Admission. As chairman of the People's Party , Ypi formed the Albanian government on December 24, 1921. He remained Prime Minister until December 26, 1922 and later that year he took over the Foreign Ministry . 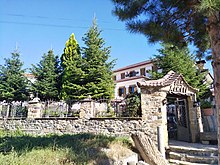 From December 2, 1922 to January 31, 1925, Xhafer Bej Ypi was a member of the High Council that served as the head of state of Albania. In June 1924 he left Albania because of the bloody revolt of Fan Noli , but formally retained his post.

During the time of Ahmet Zogu's kingdom , Xhafer Bej Ypi was the chief inspector of the royal court. The Italian occupation of Albania saw Xhafer Bey Ypi as of Liberation "from the heavy slavery of bloodthirsty Zog". After King Zogu fled, Ypi became chairman and plenipotentiary for justice of the Provisional Administrative Committee and thus incumbent head of state. From April 12th he was Minister of Justice in Shefqet Vërlaci's government. He was killed by a bomb in an air raid.