The Principality of Albania ( Albanian-Gian Principata e Shqipnis ; Albanian-Tuscan Principata e Shqipërisë ) was the first independent Albanian state of modern times. It was founded after the First Balkan War by the agreements of the London Ambassadors Conference of 1913 by means of separation from the Ottoman Empire and existed until 1925. The capital of the principality was initially Durrës and was moved to Tirana in 1920 .

The division of Albania agreed by the Balkan Federation in 1912/1913; the southern border has already been adapted to Greek demands.

After the Turkish defeat in the First Balkan War, the independence of Albania from the Ottoman Empire was proclaimed on November 28th in 1912 as a result of revolts among the Albanian population. In Vlora , an Albanian national congress, made up of representatives from southern and central Albanian regions, met and decided unanimously that Albania would be independent, free and independent from today . After the arrival of the northern Albanians in early December, the Congress had grown to 63 members and a provisional government under Ismail Qemali and Myfit Libohova was appointed. The struggle for regional, religious, political and social proportional representation began. The most important task of this first sovereign Albanian government since the late Middle Ages was to obtain international recognition. The actual territory of the new government comprised only around 4000 km² around Vlora, Fier , Lushnja and Berat with around 300,000 inhabitants, including 30,000 Turkish soldiers . The other areas were controlled by the armies of Serbia , Montenegro and Greece . The question of the form of government was not resolved by the Congress; For various reasons such as the Ottoman tradition, because all neighboring states were kingdoms and also out of consideration for the conservative upper class, the delegates preferred a monarchy. The rural population was also believed to be more likely to win over with a monarch than with a democratic form of government.

Ultimately, Albania owes its national existence to the massive protest of Austria-Hungary and Italy against the territorial desires of its neighbors. On the eve of the Balkan Wars, the members of the Balkan League (Serbia, Montenegro, Greece and Bulgaria) had agreed to split up the entire Balkans and thus also Albania. The independence of Albania was finally recognized at the London Ambassadors Conference on December 16, 1912 by the major European powers German Empire , Austria-Hungary, Russian Empire , Great Britain and Italy. On December 27, 1912, at the conference of ambassadors, the autonomy of Albania was decided under the Ottoman Sultan Mehmed V and under the administration of the great European powers. This denied Serbia the required access to the Adriatic Sea . However, Greece laid claim to parts of southern Albania and sought to move the border beyond Himara and was supported by France , but Italy refused. As a result of the Second Balkan War , the great European powers agreed on the establishment and independence of Albania as a principality under the protection of the great powers and rejected an Ottoman protectorate over Albania. However, the great powers could not agree on a recognized demarcation. The Triple Alliance made up of the German Empire, Italy and Austria-Hungary sought an Albania under Italian or Austrian sovereignty. In contrast, the Entente wanted a smaller Albania and northern Albania to join Serbia and southern Albania to Greece. In October 1913, Serbia occupied part of Albania in order to reinforce its demands. Therefore, in view of the tense situation on the Balkan peninsula and the different interests of the great powers and Balkan states , it was already difficult to agree on a recognized demarcation .

There were also ethnic and religious problems. The Albanian national people split up into two large groups, the Gegen and Tosken , which in turn became clans at one another . In the south of the country the Greek Orthodox minority of Northern Epirus felt connected to Greece, in the north the Roman Catholic Mirdites strove to preserve their independence from a Muslim central government.

In April 1913, Essad Pasha Toptani gave Shkodra to the Montenegrins in exchange for recognition as king, but he was never recognized in his own country. Instead, Prince Wilhelm zu Wied , a nephew of the Romanian Queen Elisabeth zu Wied , was elected Prince of Albania by 18 Albanian representatives in Neuwied on May 30, 1913 , and was crowned Prince of Albania on February 21, 1914. The prince set foot on Albanian soil for the first time on March 7, 1914 and knew little about the conditions there, so that he had to rely on Albanian advisors. He could not stop the power struggles between the local large landowners and was therefore unable to rule the country. The south of Albania had been occupied by Greek troops since the end of the Balkan Wars, and insurgent gangs quickly gained influence in the rest of Albania . The sphere of influence of the princely government was soon limited to Durrës, Vlora and Shkodra, where Italian soldiers were stationed. The outbreak of World War I made the situation hopeless for him and so Prince Wilhelm finally left the principality on September 3, 1914. He never abdicated, however, so governments and imperial administrators formally acted on his behalf until 1925. 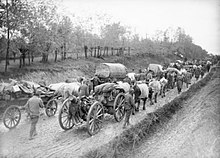 In disregard of neutrality, the Serbian army, defeated by the Central Powers, withdrew across Albania at the end of 1915

Greek separatists with the flag of Northern Epirus

Despite its neutrality, Albania was largely occupied by the warring powers Montenegro, Serbia and Italy in 1914 and Toptani returned with Serbian help. Italy occupied the island of Sazan , conquered Vlora and claimed other parts of Albania. In March 1915 Italy asked the Entente to approve the annexation of Vlora and a central Albanian protectorate under Italian sovereignty. In return, Italy agreed to the handover of northern Albania to Serbia and Montenegro and southern Albania to Greece. Although Russia initially protested, the Entente agreed to Italian demands at the London Conference of 1915 to persuade Italy to enter the war against the Central Powers .

Albania was the object of various desires. In addition to Austria-Hungary and Italy, Serbia, Greece, Bulgaria and Turkey also vied for supremacy, but Montenegro and the German Navy (Vlora) were also interested in parts of the country. At the end of 1915 the Central Powers conquered Serbia . Montenegro and northern Albania were subsequently occupied by Austria-Hungary and the south of the country by France and Greece. The Austrian military administration tried in vain to win the population over, while the army leadership under Conrad von Hötzendorf propagated the annexation of northern Albania. The Vienna Foreign Ministry under Stephan Burián , on the other hand, advocated an independent Albania under the Austro-Hungarian protectorate within its ethnographic borders, which were larger than its pre-war borders.

Bulgaria wanted to force a Bulgarian sideline under Cyril on the Albanian royal throne. The Ottoman Empire continued to lay claim to a protectorate over Albania, and in eastern Albania the Ottomans supported pro-Ottoman gangs against Serbs, Greeks and French.

Northern Epirus occupied by Greece until 1923

Even after the end of the world war, the principality found no stability, which increased the interest of the neighboring states Italy, Serbia and Greece; French and Italians stayed in the country until 1920. From 1918 to 1920 Toptani, Fan Noli and Turhan Pascha Përmeti fought for power at the same time . Italy forced the principality to agree to a protectorate, but this was rejected by Greece, as the Greeks also raised claims to southern parts of Albania until 1923.

Against plans of the Paris Peace Conference to divide Albania among its neighbors as compensation for war goals that were not fully achieved, local rulers striving for independence gathered in Lushnja in January 1920 for a national congress . At the Lushnja Congress , a constitutional law , the Lushnja Statute , was passed that no longer provided for a prince as head of state. In contrast, a government was formed, an Albanian parliament established and the capital moved to Tirana . In order not to offend the European powers and to be able to guarantee a continuity of Albania within its borders, the principality was de facto not dissolved and a Regency Council (Këshilli i lartë) was created, which consisted of the representatives of the Albanian religions. The Regency Council could propose governments, which then had to be ratified by parliament. In case of disagreement, a new national congress was to be convened. This constitution of an Albanian state subsequently forced the withdrawal of the occupying powers Italy and Greece. An Italian-Greek conflict broke out in August 1923 after Italian members of the International Commission for Determining the Albanian Borders were supposedly murdered by Albanian bandits on Greek territory.

Albania joined the League of Nations in December 1920 . The first parliamentary elections were held in February and March 1921. In the next few years, various governments with little power were replaced. 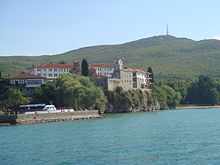 As part of the bourgeois-democratic June Revolution , the orthodox Albanian bishop and politician Fan Noli formed a liberal government in 1924. The Soviet Union recognized this government as the only major power . For diplomatic recognition, the Fan Noli government was accused by internal and external opponents of Bolshevism . Fan Noli was unable to implement his extensive reform program (agrarian reform) and Ahmet Zogu , representative of the Muslim landowners, put himself to power with Yugoslav help in December 1924. He then gave the Sveti Naum Monastery as a gift to the Kingdom of Yugoslavia , which is now part of North Macedonia . Zogu was elected President of Albania by parliament on January 31, 1925. On January 15, at Zogu's instigation, Parliament had declared the state a presidential republic based on the American model. After the Tirana treaties (friendship and security pact of November 27, 1926, defensive alliance treaty of November 22, 1927), which brought Albania into a protectorate-like dependence on Italy, this republic was replaced by the Kingdom of Albania in 1928 with Zogu as the new king.