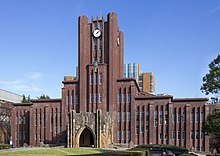 Yasuda left his home in Toyama and went to Edo , where he began to work in the currency exchange business in 1864, which he operated with generally recognized great care. In 1868 he benefited from the upheavals that the Meiji Restoration brought with it. So he bought bad government paper money (太 政 官 札, Daijōkan satsu) cheaply and sold it back to the government at full price. With that he could amass a considerable fortune. He also took on direct government contracts.

In 1876 Yasuda supported the establishment of the Third National Bank (第三 国立 銀行, Daisan kokuritsu ginkō) and in 1880 founded his own bank, the Yasuda Bank. His involvement in other banks made him the leading banker in Japan in the 1890s. - He founded the first life insurance company and expanded his interests to other areas, especially the railroad. Notwithstanding his early involvements, he later stayed as far away from government business as possible. He founded a holding company under the name Hozensha (保全 社), within which he combined his various branches of business. At the time of his death in 1921, his corporate conglomerate was one of the four big zaibatsu; he was the richest man in Japan at the time. Yasuda eventually controlled 19 banks with assets of 18 million yen and made large investments in various other areas.

Yasuda bought an old property in Tokyo on the Sumida River and had it restored. Today it is open to the public as the Yasuda Garden . In his later years he donated the Yasuda Auditorium (安 田 講堂, Yasuda Kōdō, completed 1925) of the University of Tokyo in 1921 and the 1929 completed Hibiya Public Hall Kōkaidō (日 比 谷 公会 堂) on the edge of Hibiya Park in Tokyo.