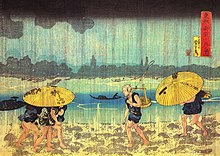 On the banks of the Sumida, woodcut in color by Kuniyoshi , around 1833

The river gave Tokyo's Sumida district its name, but the first Japanese character for the district name is derived from an alternative name for the river bank ( 墨 堤 ). Tourist boats operate on the Sumida, from which there is a spectacular view of the skyline of the Japanese capital.

The Sumida flows through the following districts of Tokyo :

The Sumida once formed the border between the provinces of Musashi and Shimousa , which gave the large bridge over the Sumida the name "Two-Country Bridge" (Ryōgoku-bashi). Later the east side of Sumida came to Musashi Province, but the name stuck. 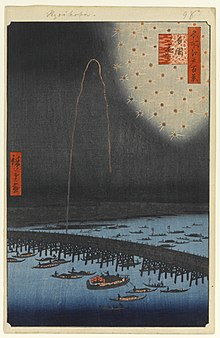 Under the name Sumidagawa Hanabi Taikai (隅田川 花火 大会), a large fireworks display has been set off over the river on the last Saturday in July near Asakusa since 1978 .

In the 1920s, with the Kantō earthquake on September 1, 1923, other worries were to be had, and the tradition of large fireworks over the Sumida ended until it was revived in 1978.