Sumida ( Japanese 墨 田 区 , - ku ) is one of the 23 districts of Tokyo Prefecture . It is located in a northeastern part of the Japanese capital Tokyo .

The name of the district comes from the Sumida ( 隅田川 , -gawa ) river of the same name . However, the first character was replaced by the identical first character of the alternative name for the river bank ( 墨 堤 ).

The district lies between the Arakawa rivers in the east and Sumida in the west.

Sumida is the seat of the following companies:

The town hall in Azumabashi

District Mayor of Sumida has been former district member of parliament Tōru Yamamoto since 2015 . In the unified regional elections in 2019 , he was re-elected against a communist candidate with over 71% of the vote. The 32 members of the local parliament were also newly elected in the uniform regional elections.

Sumida is a three-mandate constituency for the parliament of Tokyo Prefecture , which was won by one member each from Tomin First no Kai , Kōmeitō and LDP in the last election in 2017 .

For the lower house of the national parliament, the districts of Sumida and Arakawa together with part of Taitō form the constituency of Tokyo 14 , which has been represented by the liberal democrat Midori Matsushima since 2003 with interruption . In 2017 she was re-elected with 46.9% of the votes against four candidates. 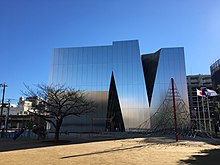