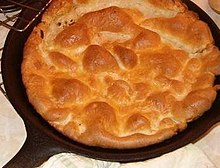 Yorkshire pudding made in a pan

Yorkshire pudding is a pastry that is served in English cuisine as an accompaniment to steaks , roast beef and other fried meat dishes.

It is made from a dough made from flour , milk , eggs , fat (traditionally beef fat ), salt and possibly pepper , parsley and nutmeg . The dough must be very runny and rest for at least half an hour. There are two ways to prepare Yorkshire pudding. For one, the dough is baked until golden brown in a pan or casserole dish over a high heat in the oven and then cut into diamonds. With the other method of preparation, the dough is poured into small pie or muffin molds in portions . In order for the dough to rise, a pan or mold must be greased and heated to a very high temperature before the dough is added. With this type of preparation, the Yorkshire pudding gets its typical hollow in which you can put the gravy.

In the traditional British Sunday roast , Yorkshire pudding is baked in the same oven as the roast beef or other meat used, with the pudding cooking under the meat so that the gravy drips into the pudding and gives it extra flavor.

Yorkshire pudding is also served as a dessert with jam or sugar syrup ("golden syrup").

The recipe is similar to that of the Swabian Pfitzauf and American Popovers.