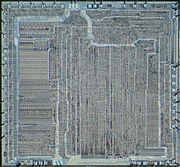 The Zilog Z8000 is a 16-bit processor with 16 16-bit - registers . It offers extended 32-bit multiply and divide instructions and a DRAM refreshing circuit, which is considered slow. There are separate processing modes for the operating system and for application programs in order to prevent the latter from accessing special memory areas.

The memory addressability varies depending on the model: the Z8001 can address 8 MB through segmented addressing and the Z8002 only 64 KB. The address space can be expanded to 48 MB using an external MMU ( Memory Management Unit ) in the Z8010.

The maximum permissible clock rate is 4 to 10 MHz.

Due to initial errors , the processor was unable to establish itself and, in contrast to its predecessor, the Z80, was only used in a few computers, e.g. B. the Commodore 900 or Olivetti M20 installed. In addition, he was in control and target system of Tomahawk - cruise missile game arcade and in pole position used. In the GDR it was used as the U8001 in the P8000 .

In the mid- 1980s, there were essentially five 16-bit processors on the market (some of these also work internally with 32-bit, but the bus interface, which is decisive for circuit complexity, was 16-bit): the i8086 from Intel, the 68000 from Motorola, Zilogs Z8000, National Semiconductors NS32016 and the TMS 9900 from Texas Instruments. The non-Intel providers could not stop Intel's market dominance despite the good processor architecture, since the PC market was predetermined by IBM . For reasons of time, Zilog had decided to implement the command set of the Z8000 as hardwired and not - like e.g. B. Motorola - by microprogramming . Correcting design errors therefore took considerably more time than with the competition, so that many customers dropped out and switched to competitors. TI was generally late and therefore had no market success.