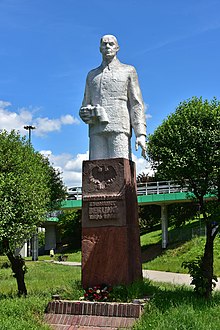 He served in the Polish Legions from 1914 to 1917 and in the Polish Army from 1918 . In September 1939 he was retired and stayed in Wilno , where he was arrested after the Soviet invasion and taken to Moscow via the Starobelsk special camp reserved for Polish officers . The internment lasted until all surviving soldiers were released in accordance with the Sikorski-Maiski Agreement in 1941.

With the rank of lieutenant colonel , he was accepted into the staff of the new Polish army by General Władysław Anders . When the Anders Army was transferred to the Middle East in 1942, he deserted to the Soviet side, for which he was demoted by General Anders and sentenced to death by the Polish military court.

A year later, with the support of Stalin, he was appointed commander of the 1st Tadeusz Kościuszko Infantry Division and promoted to general . On July 22, 1944, he was given the command of the new Polish People's Army . During the Warsaw Uprising , he tried, allegedly without consulting the Soviet leadership, to come to the aid of the fighting Poles in the capital. In October 1944 he had to relinquish the high command again, rejected the position offered to him as head of the Polish military mission in Moscow and was then forcibly sent to the Moscow Military Academy .

In 1947 he returned to Poland and a year later was appointed commander of the new General Staff Academy in Warsaw until he resigned from military service in 1953. Between 1953 and 1970 he held senior positions in the Ministry of Agriculture and Forestry. It was not until 1963 that he joined the Polish United Workers' Party (PZPR).

After the political change in 1989, his memoirs appeared posthumously .