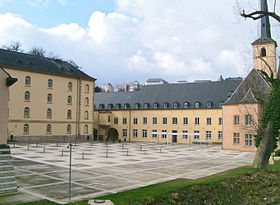 The Neumünster Abbey ( Luxembourgish Abbey Neimënster ) located in the district due to the city Luxembourg on the banks of the Alzette . 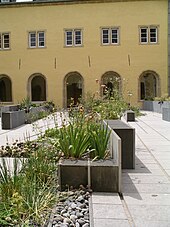 During excavations on the site, archaeologists found signs of settlement and handicrafts, which apparently date from the twelfth and thirteenth centuries, at the site of the present-day courtyard of the Robert Bruch building.

Documents prove that textile craftsmen such as weavers, dyers and walkers worked here on the water in the 14th century. The wooden huts from the second half of the 14th or the beginning of the 15th century were then replaced by stone workshops. In the 17th century there was a tanning community on the left bank of the Alzette, opposite the church.

After the old Benedictine Abbey of Altmünster was destroyed during the wars between the Kingdom of France and the Holy Roman Empire , by the troops of the King of France, Francis I , who occupied the city of Luxembourg on September 11, 1543, and in 1684, when the Troops of Louis XIV besieged and shot at, again badly damaged on the orders of Marshal Créquy and Vauban Luxemburg, the Benedictine monks built their new abbey church and the associated abbey buildings in the Grund district in 1606 . The bones of the Bohemian King John of Luxembourg († 1346) from Altmünster were also transferred there.

Like all other monasteries, Neumünster Abbey was secularized by the French revolutionary authorities in 1796 and thus expropriated when the legislation of the French " Directoire " was introduced in Luxembourg . From 1815 the Johanneskirche belonging to the monastery served the troops of the German Confederation stationed in Luxembourg as a military hospital until 1867 . After the withdrawal of the troops of the German Confederation in 1867, the abbey was used as a men's prison until 1980 after it was taken over by the Luxembourg state.

After major restoration work , the entire complex was used for socio-cultural purposes and is now the Neumünster cultural meeting point.