The Acoela (from the Greek κοῖλος koilos “hollow” with the prefix, ἀ (v) - a-, “without”) are a group of small, flattened worm-like organisms. They belong to the Bilateria , the multicellular animals with bilaterally (bilaterally) symmetrical bodies and a simple physique. For a long time it was assumed that the Acoela were the simplest Bilateria still alive today and that they could serve as a model organism for the emergence of this group. It was later recognized that they belong to the Xenacoelomorpha animal strain along with other "worm-like" organisms . The acoela comprise about 400 species that predominantly inhabit the seabed.

Acoela are mostly flattened, bilaterally symmetrical animals with a body length of a few millimeters. Most species are transparent or milky translucent, but some are vividly colored by pigments, by bodies called rhabdoid, formed from glandular secretions or by endosymbiotic unicellular algae. Acoela are shaped differently depending on their way of life, from broad and flat species that crawl around on hard substrates such as stones to elongated worm-shaped species that dig in the sand.

The name Acoela is derived from the fact that the animals do not have an intestinal lumen. The entire intestine is completely filled with cells that form an undivided cell structure (a syncytium ). The space between the intestine and the body wall is also filled with parenchymal tissue, and there is no body cavity (a coelom ) that acts as a hydroskeleton . The cells of the single-layer epidermis have numerous eyelashes ( cilia ) on the outside , with which the animals glide over the surface. Numerous unicellular mucous glands are embedded in the body wall. Under the epidermis lies a muscle tube with numerous longitudinal, transverse and diagonal muscles that support the movement and enable the animal to change its shape. Characteristic for the group is a sensory organ (a statocyst ) near the front end, it consists of a capsule lined with sensory cells in which a statolith is embedded. Some species have simple, paired eye spots, many others assume a non-specific skin light sense without special sensory organs. Numerous regions of the body surface carry individually seated sensory cells with a function that is unknown in detail. The nervous system consists of three to five pairs of nerve cell strands that run lengthways through the body and a simple brain at the front end; this can be ring-shaped, cylindrical or bilobed. The mouth of the animals is usually in the middle of the belly (as with the vortex worms ), but its position is highly variable between the different species, it can be anywhere between the front and the rear end. Some species have a muscular throat (pharynx). As described above, the intestine is filled with cell tissue and has no epithelium and no glands. An anus and excretory organs of any kind were not detected.

Acoela are simultaneous hermaphrodites with male and female germ cells. The position of the male (testes) and female (ovaries) gonads is variable; these are usually stored individually in other tissues and are not combined to form special organs. The developing sperm are collected in channels and fed to the reproductive organ. This can be complicated in shape with specialized glands, muscles, and sclerotized hard parts, but some species have only a simple gonopore. The female organs are sunk like a pocket (bursa with seminal containers) or also simple. However, sperm are never released into the open water, fertilization always takes place internally after copulation. Many species can alternatively reproduce asexually, by transverse division with (paratomy) or without (architomy) prior differentiation of the organs, or by sprouting. Most species have a high capacity for regeneration even after injuries. 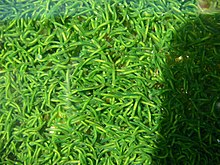 Most species of the Acoela are predatory, free-living bottom dwellers in the sea. Only two species are known from freshwater. Some species live in the digestive system of echinoderms , it is unknown whether they are possibly parasites . Acoela feed on small organisms, depending on the type of bacteria and unicellular algae, to small crustaceans , mussels and worms. Cannibalism is known of some species . Some species are dependent on endosymbiotic, photosynthetic organisms, zoochlorella or zooxanthellae in their diet .

The group includes, according to combined morphological and genetic data, five families of the so-called "lower" Acoela and six families with more modified physique, which together form the Crucimusculata (named after the transversely arranged muscles on the ventral side).

The position of some monotypical, rarely found families is unclear

Traditionally, the Acoela were initially regarded as unusual, simply built members of the animal tribe of flatworms (Plathelminthes). Some of the earlier workers compared their structure with a planula , the characteristic larval form of the cnidarians . According to this, all higher animals, the bilateria, would have arisen from the direct development (a neoteny ) of a planular larva which would have given up the associated adult stage . According to this hypothesis, the Acoela would be the direct descendants of such an organism as well as the simplest Bilateria and sister group of all other Bilateria. This position initially appeared to be supported by genetic studies and the possession of only three Hox genes , which are essential to the basic body plan .

Since the Acoela have only a few structures that are highly variable between the species and are not reinforced by hard parts, their classification according to morphological criteria was always difficult. Well-founded hypotheses were only made possible through electron microscopic examinations, especially of the fine structure of the sperm. Today's view of the relationship is based primarily on the comparison of homologous gene segments.

According to these more recent findings, the Acoela are not the sister group of the (other) Bilateria. As previously suspected on the basis of morphological features, the Nemertodermatida , nine types of small worm-shaped organisms that live in the interstitial system between the grains of sand on the coast and on the seabed, form their sister group, the common clade is called acoelomorpha . These belong unexpectedly with the enigmatic Xenoturbellida (the species of the genus Xenoturbella ) in a separate animal strain, which has been named (with the trunk word ) Xenacoelomorpha . The Xenacoelomorpha were initially probably considered to be new mouths (Deuterostomia), and therefore belonged to the large group to which the chordates (and thus also humans) belong. It now seems more likely that they are the sister group of the other bilateria. Whether the physique of the Acoela, and the Xenacoelomorpha as a whole, represents a basal (primary) condition within the Bilateria or rather goes back to a secondary simplification, is an open question to this day.